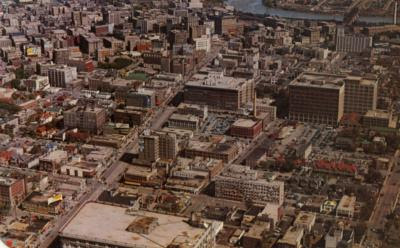 William Alloway came to Red River in 1870 at age 18. Winnipeg was not yet a city with about 12,000 people. Alloway worked his way up starting as a tobacconist, veterinarian and shipper. Within 9 years he founded Alloway and Champion which became one of the west’s largest private banks. Alloway’s fortunes grew with Winnipeg and he wanted to give something back. He felt he owed everything to Winnipeg and in 1921 he wrote a $100,000 cheque establishing the Winnipeg Foundation. Later, in 1930, Mrs. Elizabeth Alloway left an additional $2.5 million.

Kathleen Lightcap who was a founding member of the Junior League and a volunteer driver for the Meals on Wheels left $6.5 million in 1986-7. In the 1970s the James and Muriel Richardson Fund gave $1M and the George Hammill McKeag fund gave $1.2M. About 20 people have left more than $500,000. But much of the money is given by people from all walks of life who also want to give something back to their community. For example Joe McCann Transit Supervisor donated $200,000. Others like Janet Boucher who worked in the Holt Renfrew hat department gave $10,000.

In 1922 the first recipients were the Margaret Scott Nursing home set up by Miss Scott who was interested in providing the poor, the Knowles School for Boys, the VON, the Children’s Hospital and the Children’s Aid Society. They shared $6,000.

The Winnipeg Foundation helps a good idea get started and are willing to front end projects. In the Great Depression they helped out the Community Chest predecessor to the United Way. In 1935 they gave a grant to help set up the School for Social Work at the U of M. In 1953 they helped fight polio. In 1955 they helped establish the Age and Opportunity centre.

In 1958 they paid for the first computer that was installed at the Winnipeg General Hospital. In 1964 they helped Meals on Wheels and the VON’s Home Help program. In 1974 as part of centennial year they gave $100,00 for the Museum’s Urban Gallery. In 1976 they helped set up the Manitoba League for the With Disabilities. And in 1977 their annual grants exceeded $1,000,000.

Since then they have helped with Lion’s Manor senior’s housing, Fort Whyte Nature centre, and the Manitoba Childrens’ Museum. In 1994 they gave the largest grant ever, $750,000 to the Health Sciences and Children’s Research Centre.

It has about $92 million invested and has given $62 million to date. It gave out $4.25 Million in 1995. Last year they took in another 2.8 million in new donations. The principal is never touched.

There is no set budget and the Foundation is able to react to issues and projects as they arise: it can be health, education, and family depending on the time. At times it has been proactive inner city and arts issues. They helped create Winnipeg Harvest. They like to help with projects or capital works.

There are about 60 across Canada, 14 in Manitoba. Some are general, while others are private one donor funds. For example the Thomas Sill Foundation was established by a Winnipeg accountant who was a partner in the firm Sill Streuber Fiske, a firm which exists today. He gave the largest single donation to charity ever in Manitoba leaving $19.2 million when he died in 1986.