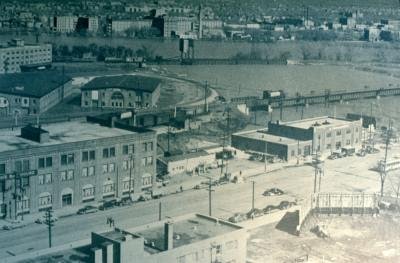 As the 1950 flood’s impact was felt Manitobans quickly created a relief agency. Manitoba and the world pitched in to help with the creation of the Manitoba Flood Relief Fund.

Black friday May 5; final crest was May 13

There was a run on linseed which was used to plug the sewers.

2,000 homes were damaged above the first floor (Second floor)

Morris had the worst damage largely because of the poor construction of its buildings. Analysis overall showed that poorly constructed homes faced the worst damage. Those with concrete foundations did the best.

There was a secret plan called Operation Black Boy which would have called a total evacuation of Winnipeg with preparations for mode of transport and everything. Another foot of water higher and the power would have been out. The goods in Winnipeg great warehouses would have been destroyed. As it was the river put most of Lombard Ave under water and there were sandbags at Portage and Main.

The committee first met on May 12, a week after the flood first hit on Black Friday. The idea came from Mayor Garnet Coulter who was at a mayor’s conference in new Orleans. Within 2 weeks the agency had $400,000. The guy in charge was HW Manning, vice president of Great West Life.

WHERE DID THE MONEY COME FROM

It came from everywhere in the world. A lot from Manitobans themselves.

On May 14 every radio station in Canada carried a 20 minute new report on the flood and an appeal for donations. The following Sunday May 16 Bob Hope asked for donations to the flood at the close of his show.

Eatons across the country matched its employees donations dollar for dollar giving $307,034. The agency sold a picture book of the flood for $1 called “THE RIVER RAMPANT” Kids shined shoes for 15 cents, Movie Theatres across the country took collections. In Winnipeg people were urged to donate a day’s wages.

In Toronto they held red River relief Rally at maple Leaf gardens. The entertainment which included Giselle McKenzie was broadcast on 800 radio stations throughout North America. The fund insisted on money because it was such a hassle to obtain and move goods around. The British Parliament gave 300,000 pounds. The British were noted for being unwilling to give cash.

It did a great job raising money: $8,897,618 by November. It was a generous group in distributing even though I saw an appeal by residents of the Glenwood area. By the end it had trouble giving all the money away. It was left with $2,000,000 which went to start up the Canadian Disaster Relief Fund. Administration costs were only 2%. They even helped small businesses many whom were farmers to buy new stock.

It cost the Manitoba government $42M. That was the equivalent of the entire year’s provincial budget at the time. And how much did the insurance companies pay in the 1950 flood? Almost nothing!