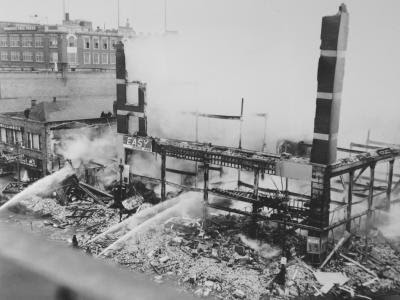 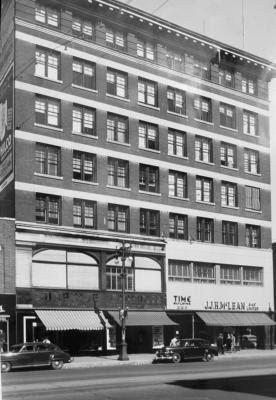 “The big fire that threatened Eatons”

On June 8, 1954, a major fire broke out on Portage Ave. causing agreat holocaust on Portage Ave. that destroyed the old Time Building, and almost spread to Eatons. The fire broke out just past midnight on Tuesday June 8. It had been a very windy night with the wind blowing over 80km. The alarm came in at 1:18 am and when the fire crew got there, they discovered a fire in the neon sign above a clothing store at the Time Building. But it was stubborn and quickly burned its way up between the floors of this 7 storey building.

The Time Building located was on the north-west corner of Portage Ave. and Hargrave St. diagonally opposite Eatons. It housed a maze of offices and had the well-known J. J. H. McLean piano store on the first floor.

The wind continued to fan the flames and by dawn every available fire-fighter and crew had been called to the scene as the fire had now jumped east across Hargrave and began to destroy other buildings. The firemen created a vertical wall of water along Portage Ave. to protect the buildings on the north side. At one point flames were leaping north across Portage Ave. Eaton’s own 50 man fire crew had been playing a curtain of water over the front but this did not prevent the fire reaching the big store. Every window facing Portage Ave. broke and a small fire started on the 6th floor. The store’s 4,500 employees were sent home as they arrived for work.

Apparently, Portage Ave. looked like it had been hit by an air raid. It was the city’s biggest fire. A neighbouring building, the Dismorr Block, lost two floors. Over 100 businesses were destroyed. It caused $3 million in damages. Yet no one was injured. The fire was blamed on the wind. Six days after the fire, firemen were still on the scene dampening smouldering debris. It cost the city $25,000 to clean up and another $9,000 for damaged equipment.

The Time building was replaced by the Bank of Commerce complete with its sign of the times: Winnipeg’s first drive through bank. It still looks like quite a modern building fifty years later.