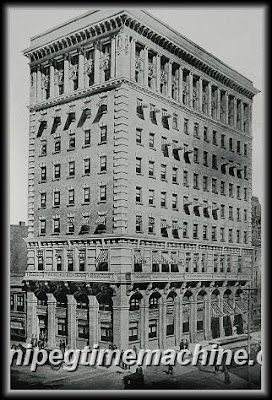 “The story of Winnipeg’s first skyscraper”

The Royal Tower was built in 1903 for the Union Bank of Canada. And it was constructed on what was once a prime site at the corner of William and Main St. just south of the old gingerbread city hall. The Union Bank helped open up the west by providing loans to prairie homesteaders starting with its first Winnipeg office in 1882. In 1912 Winnipeg became the Union Bank’s head office and it operated as a truly western bank. It had 67 branches in Manitoba. But in 1925 the Union Bank was absorbed by the Royal Bank.

It was taken back by the city from Winnipeg from Toronto developer Victor Biase because he had not paid his taxes. The city is now considering its options with various alternative redevelopment schemes. Last fall they looked at the decorative terra cotta that adorns the exterior of the building, and made sure that there were not pieces that were about to fall down on pedestrians.

It’s a landmark. It forms the backdrop of so many images of Main St. It became Winnipeg’s first real skyscraper at 156 feet and ten storeys. It was also the first steel frame office tower in the city and fireproof to the standards of the day. Architects Darling and Pearson were selected to do this important building. As Canada’s top architects, Darling and Pearson went on to do other important banks like the Bank of Commerce at 389 Main, the Bank of Nova Scotia on Portage Ave. and the Winnipeg Grain Exchange Building at 167 Lombard Ave.

It has had poor tenancies for thirty years. There are structural problems with the centre section having sunk. Despite it sitting on 21 concrete caissons, in 1917 the bank had to redo some of the footings and caissons. It is built over what was once Brown’s Creek. The centre of the building continued to sink and in 1943 more foundation repairs were made. It is still sunk today. Then there is the problem of each floor being too small for today’s needs, hence the need for an addition and the need to acquire the Leland. The city showed foresight in buying it.

A plan for its rehabilitation has been under consideration for years.