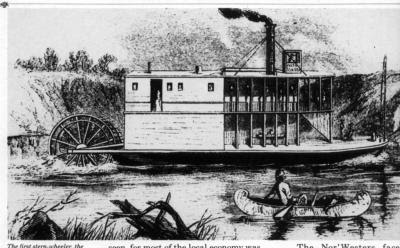 On May 19, 1859 the Anson Northup became the first steamboat to successfully launch on the Red River reaching Fort Garry on June 10. It arose out of a sense of opportunity that St Paul Minnesota businessmen saw in the Red River district and the Canadian North West. They were encouraged by the Hudson Bay company’s interest in pursuing this American route over their traditional Hudson Bay route. In January 1859 the St Paul Chamber of Commerce offered $1,000 to whoever could put the first riverboat on the Red and get it to Fort Garry. When the prize was raised to $2,000 Captain Anson Northup took on the challenge.

RIVER TRANSPORTATION ON THE RED

For centuries the aboriginals had used the rivers for transportation and so did the fur traders. Prior to this north south route most traffic had been through Hudson Bay. But by the 1840s well developed cart trails were active between red River and St Paul. By 1856 half the goods reaching Red River came through St Paul. Brigades of Red River carts were bringing up machinery for a textile mill and agricultural equipment like reapers and mowers. The emerging system of the railroad, the steamship and then the red river cart proved more efficient than the HBC’s Hudson Bay route. Even the HBC saw these benefits and began to be supportive of this north south route. The challenge was out to replace the red river cart with steamboats on the Red as they had been active on the Mississippi since the 1820s.

WHERE DID THE ANSON NORTHUP COME FROM?

It was actually comprised of parts of an earlier boat called the North Star that had been dismantled the previous winter at Crow Wing on the Mississippi. Thirty men worked with 13 yokes of oxen and 17 teams of horses to drag the machinery and fresh lumber the 150 mile distance over the winter’s snows. It was reassembled at LaFayette on the mouth the Sheyene River on the Red and renamed the Anson Northup and launched on May 19, 1859 just as the flood waters were receding. It was 90 feet long and had a beam of 20 feet. It was powered by a one hundred horsepower engine. It was modest example of a riverboat looking much like a house boat with a smoke stack and the paddle wheel on the stern. Only on the second level was there room for a deck. The entire first deck went for the storage of wood, much of which was cut as the boat travelled north along the river.

It was truly a voyage of enterprise, and the ship was not lacking in enterprising individuals who wanted to get in on the ground floor of what would later become a boom town. Among the group of first arrivals was the man noted for having begun the corner of Portage and Main and that was Henry McKenny. McKenny went on to introduce lumbering in the 1870s.

HOW SIGNIFICANT WAS THE RIVER TRAVEL THAT BEGAN ON THE RED?

It had its ups and owns. The Red is a shallow river with many bends. The 1860s the first decade of operation were noted as very low river levels making it a challenge to make it to Fort Garry. Along with problems with the Indians in 1861 and 1862 this early venture had its growing pains. Through the 1870s steamships proliferated. Many immigrants came to Winnipeg in that decade. But the competition and coming of the railroad meant the end of these ships. By the end of the 1870s a period of less than 20 years, the steamboat era on the Red was over. Ironically a steamship brought the first locomotive to St Boniface in 1878.

After refurbishment in Nettley Creek the ship was sold to Burbanks and then to Hudson Bay Co in 1861. Unfortunately it sank that year at Cooks Creek just as winter was coming on. Parts were salvaged and its engine is thought to have gone on to power a flour mill at St Francois Xavier.