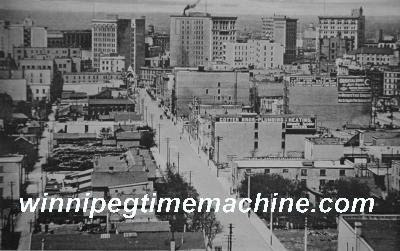 Winnipeg Used History Instead of Numbers

On March 6, 1873, the first street sign was erected in Winnipeg. Winnipeg is noted for naming streets after historical figures unlike other cities like Edmonton that have developed a numbering system. But there were a couple of years in the early 1890s when Winnipeg renamed all of its streets with numbers. Broadway was named in 1881 but in 1891 it was renamed 9th Avenue South. They went back to Broadway in 1893.

Streets were named after important people: early settlers like Alexander Ross. Or Andrew McDermot, or AGB Bannatyne. Some of the oldest names are in the Hudson Bay reserve Winnipeg: the downtown central business district south of Portage. Fort St is named after Fort Garry. Garry St is named after Nicholas Garry. Donald and Smith are named after Donald Smith of the Hudson Bay Co. Hargrave was an old HBC man who lived where Eatons is built today. Edmonton and Carlton were named for the trails that went out west. Vaughan is named after Winnipeg’s first surveyor. York is for the “York” Hudson Bay Warehouse. St Mary’s is for a Catholic boys school.

Main St started as a north-south trail and eventually became a street in 1874.

Portage Ave was named in 1880 and at the turn of the century and before named highways, the Portage Trail was considered the world’s longest street at 800 miles to Edmonton.

Corydon was named in 1882 for Corydon Partlow Brown an MLA in 1874 and appropriately Minister of Public Works. But previously it was known as Jackson St.

Winnipeg added a lot of new areas and streets in its growth oriented 1970s, but there is little documentation from the 1970s as to what the names mean. It is thought that developers named streets after their kids’ names and wives’ names.

In the Maples a lot of names start with Ma’s. Madrigal, Malcana etc

Garden city likes to name streets after flowers and plants.

Naming is important marketing theme for developers today. The street names in White Ridge came from an English map.

Waverly Heights likes lake names and Island Lakes also has names that have to do with water.

In Westwood there is a section of streets named after English Poets like Longfellow Shelley etc.

There is a section of north Fort Garry where the streets are named after planets like Jupiter, Mercury, Saturn, Mars and Neptune.

The city allows 20 characters max in a name. A fellow called Chris Thorpe at the City of Winnipeg is responsible for the process of naming streets today.