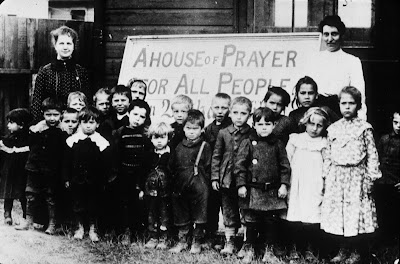 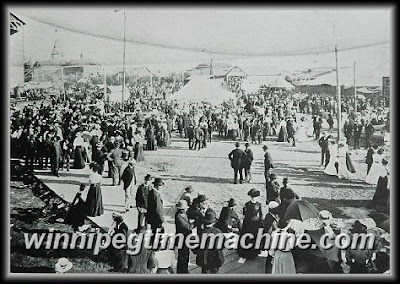 On the developing prairie, which had 200,000 more men than women, prostitution was an early fact of life. Especially so in Winnipeg, the gateway city. At the CPR Station, “harvesters specials” would pour out men in the hundreds, into the 60 hotels 21 poolrooms, 16 theatres, and 50 disorderly houses around Winnipeg’s Main Street. Young single men, looking for entertainment, escape, and sex.

James Gray writes that newsboys working near the station made more money selling condoms, than they did papers. Social reformer, J.S. Woodsworth’s book “My Neighbour” drew a map showing exactly where men found their fun: in the 50 whore houses on Annabella and McFarlane Streets.

Winnipeg’s first brothels were set up north of Colony and Portage. But when Manitoba College was built (now the National Research Council site) the houses were driven away.

In the late 1880s, the brothels moved to Thomas St., a mile away from the nearest house, and operated till the early 1900s without interference from authorities.

But once growth had caught up, complaints forced police to act. In a midnight raid in January 1904, police arrested 86 women, driving the Thomas Street houses out of business. Later in October, to help clear the shame, city fathers renamed Thomas St, as Minto St, after visiting dignitary, Lord Minto. But almost immediately the enforcement seemed to backfire. Closing the houses had turned the women into streetwalkers. And their new walk was Portage and Main.

It was time to fix things. The Police Commission gave Police Chief JC McRae power to handle the matter discretely, with his own best judgement. McRae decided he would re-establish the red light district.

He chose Annabella Street in Point Douglas, a secluded location. Out of sight, out of mind. And it would be easier to control. The Chief told the news to Minnie Woods who would reign as Winnipeg’s “queen of the brothels” for the next 30 years. She spread it to the sisterhood.

John Beaman, a real estate agent was recruited to help the madams find houses. Minnie bought the biggest house in the area with seven rooms at 157 Annabella, and paid only $2,000. Madam Lila Anderson last in, paid $12,000 in a booming market. By July of 1909 Annabella St was all brothels. Complete with the brightest porch lights in Winnipeg and house numbers more than a foot high.

The morality squad inspected the houses regularly and the women were required to have a medical examination and certificate every two weeks. But within the year there was a public outcry. Winnipeg’s short experiment controlling prostitution had worked too well. The moralists were in an uproar and accused the City police with corruption. Some remembered how Winnipeg’s last police chief, had himself been caught in a “disorderly house” raid decades earlier.

REPORT ON THE TRADE

A Royal Commission led by T A Robson took testimony in 1910. Moral reformers hired a private detective to provide their facts to the commission. Their detective estimated that on an average night, the red light district processed 292 customers in 2 1/2 hours.

A Manitoba telephone employee testified that Madam Amy Norris’ pay phone had 800 calls per months estimated to be calls for cabs for departing clients. Four hundred and ninety people were estimated to be engaged in prostitution in 1910.

Madam Lila Anderson told of coming to Winnipeg with her sister, from Ohio. They employed four other girls and guessed her patronage at 10-15 customers per night. The Commission found no evidence of police corruption. But it concluded that a policy of police toleration had resulted in the disturbance of the peace and good order.

Police reluctantly acted. Once again, the brothels were dispersed. But the legend of Annabella endured. And so did madams like Gertie Curney, who continued to offer Winnipeg’s carriage trade a classic Parisian Bordello complete with tapestries, a French cook, and a Chinese houseboy. Till 1929. After that, “amateurs” sprang up during depression, and put even Gertie out of business.