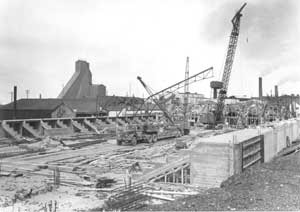 Flin Flon is the gateway to a nature-lover’s paradise. Located at the meeting point of three Canadian geological regions, the EDGE gives you access to an astounding variety of landscapes. The untouched, rock surfaces of the Canadian Shield to the north, polished smooth by the last glaciations, provide a dizzying array of lakes, swamps and muskegs. To the south, one can see the Precambrian-Paleozoic contact, an escarpment rising up to thirty metres above the southern country that boasts the even shored lakes of the Manitoba Lowlands. And, to the west, the Great Plains of Saskatchewan offer a breath-taking agrarian vastness that must experienced to be believed.

Besides taking in the beautiful sights, activities available in the include golf, swimming, fishing in both summer and winter, camping, and even scuba-diving.

The history of Flin Flon and the surrounding region is steeped in romantic adventure, as the entire area was settled by men and women in search of their fortunes in gold. In 1910, a group of prospectors found gold in quartz veins on the West Side of Amisk Lake. Members of this group were Jack and Dan Mosher, Thomas Creighton, and Leon and Isidor Dion – names that appear repeatedly in the history of the region. This deposit led to the development of the Prince Albert Mine that operated in 1937 and again from 1940 to 1942.

By 1913, people were coming from all over Canada to make their fortunes. This was the first major discovery of gold west of the Ontario border since the Klondike gold rush. More than a thousand men, and even two women, came to stake claims. The ‘town’, which sprang up, was called Beaver City, and consisted of a row of tents and log cabins, as well as two cookhouses capable of feeding two hundred men at a time. Commercial fishing was also started on Amisk Lake in 1913. Freight was hauled by York Boat in the summer and by sleigh in the winter.

World War 1 and a subsequent outbreak of Spanish influenza contributed to the demise of Beaver City. When war broke out in 1914, one man was left as caretaker of Beaver City. After three years of looking after a deserted town, Angus McDonald was given the town as payment. Roderick McDermott is the last known surviving resident of the Beaver City settlement. Mr. and Mrs. McDermott still reside in Denare Beach.

Gold prospecting continued through 1914 and 1915. In 1915, Creighton, the Moshers and the Dions discovered the massive Flin Flon copper-zinc orebody and prospecting shifted from gold to base metals. The complex mineralogy of the deposit inhibited its development until the Mandy Mine was established along Flin Flon Lake in 1915. Eventually, the Mandy Mine became profitable and busy enough that no one returned to the gold claims. The community of Flin Flon came into existence as Beaver City disappeared.