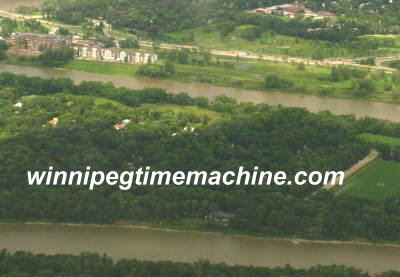 The Fort Garry area which was incorporated as a municipality on April 16, 1912 and the Wildewood area is one of its distinctive residential areas. Fort Garry was initially part of St. Vital and was settled by Metis and Quebecois farmers. These early settlers were Metis boatmen who build their homes close to the river’s edge as it was their best choice in transportation. One of the most famous landowners in the area that later became Wildewood was Ambroise Lepine. But after the Riel incident, many French people left the area and were replaced by Anglophones. Over the years it has completely lost its French origins. Only in the south end at St. Norbert will you see what the early Fort Garry was like.

But by 1900 virtually all traces of the Metis heritage of the area was gone. One developer after another tried to develop the land starting with Colonel RM Thompson who in 1908 first introduced the name Wildewood. Thompson’s plan was for a very exclusive area just like was developing then on Wellington Cres. They built roads and Col Thompson had a huge Victorian mansion built at the point of the Red River. Col Thompson went to fight in WW1 and never returned. His house was not fully completed and was not occupied for 17 years and was to be demolished in 1933 after suffering years of vandalism. Finally in 1934, it was bought by Ravenscourt School and renovated to become a boy’s school. But the land continued to bounce back and forth between the City of Winnipeg and the Fort Garry municipality. At one time during the 1930s the city was contemplating making it into a park just like Assiniboine Park. But lack of money saw the city give it back to Fort Garry.

HOW WILDEWOOD PARK CAME ABOUT

Enter Hubert Bird. Bird was the owner of Bird construction. Bird had built aerodromes during WW1 and after the war he started the Bird construction company and built Union Station in Regina, and the Swifts plant in Winnipeg during the 1930s. During WW2 he built half the airfields and barracks in western Canada. During WW2 while flying over Radburn New Jersey, Bird saw an example of a new garden suburb with cul de sacs all built around a central shared park. Bird had seen his model for Wildewood and purchased the land comprising Wildewood.

WW2 had given Bird experience in mass production techniques and he had seen the potential of applying these techniques to reduce housing costs in Wildewood. It had never been done before with housing.

The returning WW2 vets needed affordable housing and Bird gave them 5 house plans to choose from. Bird hired the firm GBR (Still active and building the Jewish Community campus) to design the project. They did market research to find preferences for house features like the preferred number of bedrooms. Almost half wanted storey and a half and most wanted forced air heating. Great West Life agreed to finance the project and scale model for the area was placed at Eatons, the hub of the city at the time.

Then construction began using assembly line techniques after materials had been procured en masse and brought to the site. Lumber had even been salvaged from grain bins. Panel forms were used for pouring basements, and the exterior walls were prefabed. Specialty crews worked on flooring, shingling, and insulation. A US newspaper featured a bungalow and a storey and a half built in just 58 minutes. The realty firm SS Stevensen handled the sales, and it took only 2 years to sell out. Mature trees were spared preserving the area’s main amenity: its heavily wooded quality. The neighbourhood had to do their own snow removal buy hiring a man and buying a horse drawn plough. Cost per resident was $.50 annually. They also bought their own mosquito fogger.

The area had one of the highest birth rates in the country and some dubbed it Childwood and Fertile Valley. Doug Henning the magician is one.

◀ THE TALE OF THE WOLSELEY ELM
FLIN FLON HISTORY ▶