THE TALE OF THE WOLSELEY ELM 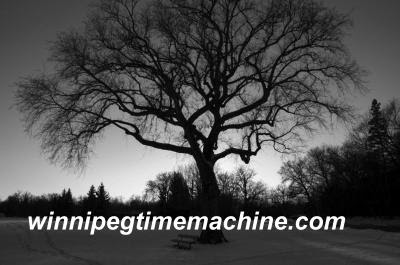 THE TALE OF THE WOLSELEY ELM

In 1957, a giant triple-trunked elm stood in the centre of Wolseley Avenue and Greenwood St in Winnipeg. It had been planted by a woman resident a hundred years earlier, and as early as the turn of the century, it was considered a traffic hazard. The area’s residents had fought many battles to preserve it even though traffic planners had long wanted to cut it down. In the summer of 1957 the traffic department decided that the Wolseley Elm finally had to go. It was a traffic hazard. The residents thought that on the contrary it was a safety feature as it required traffic to slow down to go around it.

THE BATTLE TO SAVE THE ELM

The issue immediately became contentious. The Free Press wrote in an editorial titled “Lay That Buzz Saw Down,” that the “aldermen are asking for trouble, when they chop down city trees, and they invite a torrent of criticism when they eye the one that grows on Wolseley. They really should know better. They say it is a nuisance. The truth is the tree bothers some strange civic clique which abhors individuality and has a passion for unrelenting conformity.” Alderman Crawford retorted “Lets grow a big fat tree right in the middle of Portage and Main.” In response Wolseley residents Mrs Wolfram and Mrs McCord began a fight to save the tree.

Mayor Juba who had just been elected mayor responded to the people’s wishes. On September 19, 1957 the Free Press front page headline read “Wild Women Win-Juba Breaks Law to Save Tree” At nine that morning a convoy of civic vehicles arrived to cut it down. A group of women gathered around the tree with their arms folded in defiance. They are going to have to chop us down too if they want to chop our tree said the women. As the city employee approached the tree with his buzz saw, an old grandmother with an axe shouted out “We don’t think you should do this.” A crowd of three hundred had gathered to support the 12 women that were now guarding the tree. Juba then emerged from the crowd and was convinced by the women to find a way out of it. On the premise of public safety, Juba put an end to that day. Mrs Borrowman kissed the mayor on the cheek and invited him to her place for tea.

The issue immediately captured national TV coverage and McLeans magazine did a big feature on the Wolseley Elm and Mayor Juba. But a few days later vandals poured gasoline on the tree and set it ablaze. Grafts were performed by a University tree expert and the tree revived the following spring. But in June 1958 three university students attacked the tree with saws and a crowbar. They were caught and fined $150 each.

Finally on Halloween October 31, 1958 the Wolseley Elm has seen its last season. At three in the morning residents awakened to two loud explosions. It was like two canon blast said a resident. The street lights were blown out and the tree had been blown up. Police suspected dynamite, but despite an enquiry, the culprits were never found. It was thought to be a KKK like warning, because two months earlier the residents had found a rooster on the tree. A psychiatrist said that people who blow up trees a are not mad at trees but at society. By June of 1960 no signs of life were evident. A kind of death certificate was issued and even Mrs Borrowman agreed that the tree should now come down. She asked for a piece of the tree so that she could have an electric lamp made.

Mayor Juba had emerged a hero in the way he had handled his first controversial issue. He had gone with his instincts. It was the first of many public victories.