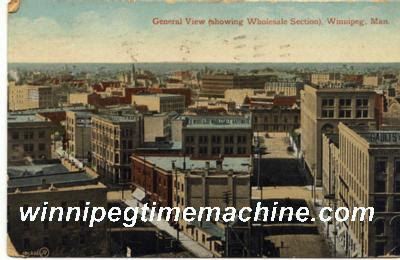 Rag Trade Boomed Despite the Depression

Winnipeg’s garment trade was taking off in 1930 when a garment worker’s strike brought production to a halt on Feb 25 1931. Winnipeg’s Rag Trade boomed, while warehousing declined in Winnipeg’s 1930s. Starting as small family enterprises run by Jewish tailors, by 1970 the garment trade had become Manitoba’s second largest industry.

In 1935 Sam Herbst succeeded in establishing smoother labour relations in the trade. For the next 25 years there would not be a single strike in the trade. Before the union, ladies could be fired for talking or for taking too long in the bathroom. Wages were poor at 18 cents per hour. One worker recalled receiving one penny for every 12 buttons she sewed to each army shirt. Some had to work 60 hours a week for part the year and were laid off for several months. Wages went up to 25 cents per hour after the WW2. Today most of it is on piecework, and the going rate is 12 cents per minute reflecting about $7 per hour.

THE GARMENT INDUSTRY ESTABLISHES IN WINNIPEG

How did Winnipeg, originally an agricultural area, grow such an industry? By 1874, a year after incorporation as a city, Winnipeg had two men’s tailors and one woman’s dressmaker. But during the 1880s, 20 new businesses would thrive. They made what prairie people needed, by hand, in small operations. In 1899, Moses Haid, established the first mass production apparel manufacturer “Winnipeg Shirt and Overall Company.” By 1906, 19 firms had been founded by families like Berkowitz, Crowley, Freed, Kennedy, Jacob, Neiman, Nitikman, Shore, Stall, Steinberg, and Waldman.

In the early 20th century, Jewish people fleeing European persecution began to arrive in Winnipeg. The tailoring skills that had been passed down from generation to generation were activated in the cheap warehouse space sitting vacant in Winnipeg’s warehouse district. The building of the Panama Canal in 1914 sharply cut into Winnipeg’s growth. Now it became cheaper to ship goods west by the canal instead of through Winnipeg, leaving many warehouses empty and abandoned in the 1920s. For the needle trade this setback for Winnipeg marked its opportunity. Apparel manufacturers now had prime space available at bargain prices. And grow they did.

In 1918 Benjamin Jacob and John Crowley were the first to move away from work clothes to producing ladies clothing. And to promote their rapid success, Winnipeg garment manufacturers got together in 1925 to put on Manitoba’s first fashion show. By the 1930s 3,000 people had work in trade. Between 1941 and 1951 the industry grew 213%. In the peak year 1946, 14 new firms were established.

Today the rag trade employs 8,000 people in over 115 factories. And it supplies many famous brands. Names like Calvin Klein jeans, Gap, Northern Reflections, OshKosh B’Gosh, Eddie Bauer outerwear, London Fog, are all manufactured in Winnipeg’s garment industry, and help it gross $700 million in annual sales. Uniforms for everyone in the Canadian Armed forces, specialised sportswear for curling, warm durable outerwear tested in Canada’s north or “Tundra” sweaters for Ronald Reagan. All made in Winnipeg.