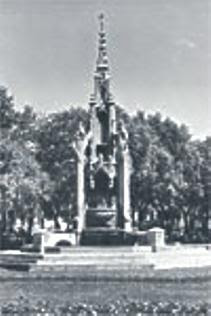 You will find the Waddell Fountain in the north east corner of Central Park. It is a Gothic style fountain that has drawn Winnipeg visitors for 82 hot Winnipeg summers.

Murray Peterson’s book on Winnipeg Landmarks describes it as an example of “high Victorian architecture” …. a “collection of flying buttresses and pinnacles” with water flowing out of lion’s heads. It’s based on a design of a monument to Sir Walter Scott located in Edinburgh. The Waddells had come to Winnipeg in the 1880s. Mr. Waddell was a local leader of the Temperance movement. The Waddells were married for 25 years but had no children. They lived around the corner from Central Park at 457 Sargent and would go for frequent walks into the new Central Park. It was a very fashionable neighbourhood then. The Park was ringed with fine homes, and it had tennis courts and a bandstand as well as winding paths and gardens. Mrs. Waddell’s gift would complete the park which had once been undesirable low lying land that had required thousands of truckloads of fill.

MRS WADDELL’S DEATH RESULTS IN THIS FOUNTAIN Eighty-eight years ago on January 23, 1908, Mrs. Emily Margaret Waddell passed away. Her will contained an unusual provision. Should her husband remarry, $10,000 from her $56,000 estate was to be used to build a public fountain in Central Park. The will was dated 1904. It is not even clear Thomas knew of the provision. It does not look like Mr WAddell complied right away. Maybe he was just a procrastinator. Her will did not come to light till 1911. The will compelled the city to follow up on the provision of a fountain. By this time husband Thomas Waddell was engaged to be married. He just could not perform. He claimed he was desperately in debt due to some real estate investments that went belly up. It took two years for Waddell to find the money, and finally the Parks Board approved a design by Winnipeg architect John Manuel. It was completed in 1914 and cost $9,722. Ten thousand dollars was a huge amount of money then. It would have built one of the finest houses in Crescentwood. A reporter is noted to have said “A truly remarkable fountain could be erected for this sum.” In fact the Conservatory at Assiniboine Park was built around the same time for $15,000.

A WIFE’S REVENGE OR A TRIBUTE TO THEIR LOVE Mrs Waddell loved the park. But building the fountain was required only if her husband remarried. Assuming she suspected her “beloved husband” would remarry as most husbands did, it suggests a wish to see a monument to their life together in the place she seemed to love. I guess it depends on how you see human nature. It might be interesting to invite your listeners to answer the question. I wonder if any of your listeners know more. Parks seem to hold appeal for gifts even today. For example Leo Mol donated 200 sculptures in 1991 for the Leo Mol Sculpture Garden. (June 1991) The other major gift is probably Kathleen Richardson’s donation of the old Richardson property which is now passive park along Wellington crescent. (Jan 19th 1977)