THE SALVATION ARMY’S WORK IN WINNIPEG 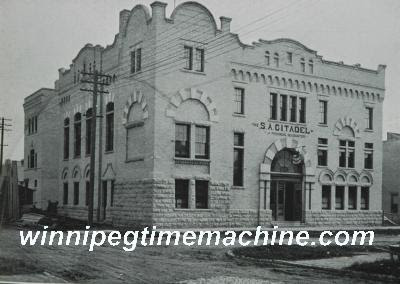 The Salvation Army was started in London England in 1865 by William Booth who wanted to do something to improve the lives of poor people. “General” Booth as he is described in the literature literally created an army to attack poverty and to bring religion to the needy. The Salvation Army still remains very much a religious organization.

They first came to Winnipeg in early 1883. The Frank Vinall family came from Brighton England. They had already been active in a Salvation Army corps in Sussex. The Vinalls were able to persuade Canadian Salvation Army headquarters to establish an office in Winnipeg. And the first Winnipeg corps comprising a 3 man, 3 woman unit arrived in Winnipeg on December 10, 1886 and began to work from a building on Princess Ave.

There was a lot of work to be done in Winnipeg. Red River seemed ripe for salvation and was described by some as a very wicked place. Winnipeg was still a pioneer community. There had been the economic collapse in 1883 after the 1881-1882 land boom. Winnipeg was still very much a place of tents. There were many bush workers, railway men and other tramps as they were called then.

The Vinall’s initial efforts of songs and prayer in front of the post office were not well received. The May 1883 paper noted that “if the morals of the community need correction it will have to be done through some other means.” But the public soon came to appreciate what the Salvation Army did for man’s daily needs. And by 1888, the Salvation Army was also set up in Brandon, Neepawa, Morden, Minnedossa, and Carberry.

The Salvation Army along with other private groups and churches seemed to be working well ahead of government by innovating most social services.
They pioneered outreach work visiting people in their own homes.

In 1890 they founded the Children’s Shelter on Ross Avenue to house destitute mothers and homeless children. In 1906 they established Grace Hospital which became their first incorporated hospital in Canada. It was the idea of Evangeline Booth the founder Booth’s daughter. In 1906 they started the first used clothing depot at Logan and King St.

The SA led the way with by helping house hundreds of returning soldiers from WW1 in two hotels they bought for the purpose. And later during the depression, in a 3 month period in 1931, they gave out 18,000 parcels of clothing, 8,500 meals, and beds to thousands of needy migrant men.

In 1918 Grace hospital’s finances became very strained. Grace refused no one and ran into serious debt. To deal with the financial shortfall they made their first Red Shield Appeal. It raised $60,000 that spring of which $25,000 helped save the hospital.

As well as their good works, the SA has also left us some architecture like the Citadel located at 221 Rupert Ave. This three story brick structure was built in 1900 by J. Wilson Gray who also designed the much more ornate Confederation Life Building.

This building is still standing a block north of city hall in the middle of Winnipeg’s Chinatown, and badly in need of renewal. It once contained a 1200 seat hall and became focus of their spiritual and administrative work in Winnipeg.