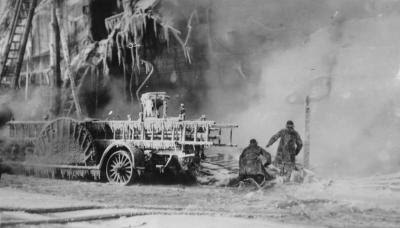 The trials and tribulations of the fire dept

Winnipeg dedicated its first fire hall Feb 7, 1875. But for the next 7 years till a permanent professional fire dept was organised, volunteers did the job. There was a time when the new city of Winnipeg had no fire protection. When fire broke out, a chemical pumper would be borrowed from the Hudson Bay Co. In 1875, a by-law establishing a fire dept was passed, with a volunteer brigade providing the labour. Prominent early citizens became members of the volunteer dept: James Ashdown, Thomas Ryan, Stewart Mulvey and Daniel McMillan.

Six fire tanks were built and sunk into the ground along Main St. Water came from an artesian well at the corner of Logan and Main. Labour for digging the trenches was supplied involuntarily by drunks reporting to magistrate’s court. Alderman Archibald Wright telegraphed an order to Silsby Manufacturing Co for Winnipeg’s first Steam Pumper. He was quoted 6 months delivery. But the next day Silsby offered a much better model for another $500 with delivery within 10 days. The engine arrived promptly by the Steamer Dakota but federal customs charges and doubled shipping costs saw the engine under wraps till the extra costs were resolved. The pool of 40 volunteer firemen received $1 per fire and 50 cents for false alarms. If they failed to report at the call of the Grace St Church bell they were each fined $1.

The new pumper’s first job was to fill the tanks with water. By early Dec 1874 the brigade was spoiling for its first challenge. It came a month later on Jan 11 1875: fire broke out in the McDermot Block. It was -31 F as the Grace Church bells called the volunteers from their beds. Within 12 minutes water was flowing and within 21 minutes of the alarm the fire was all under control. Surrounding buildings were saved, but the McDermot Block housing the St James Restaurant formerly Red River Hall burned to the ground.

The firemen had to pull the pumper by hand, as horses were not available nearby. Council soon remedied this by having horses stabled nearby. Lombard Ave was the site for the first fire station that stored the steam pumper, 2,000 feet of hose and four hand hose reels. On Christmas Day 1875, the fire hall burned to the ground destroying all the new equipment the dept had proudly assembled over its first year. By February, a new fire engine had been delivered. Local insurers had agreed not to cancel policies. In 1878 a new fire hall opened. At a cost of $7,000 this one was built to be fireproof.

In 1882 the volunteers decided to disband and to form a full time fire dept. Winnipeg was booming with hundreds of new buildings. And the population was now 30,000. The newly created jobs were highly coveted. One hundred and fifty people applied to be firemen. The first chief was WO McRobbie who served from 1882 to 1889. McRobbie with 25 years experience in the Montreal fire brigade agreed to be chief for $1,800 per year. On start-up the dept hired 36 full time men and bought 17 horses. The force would spend $150,000 over the next 20 years. But it was not until Winnipeg built the high-pressure station on James Ave in 1907 that fire insurance rates dropped.