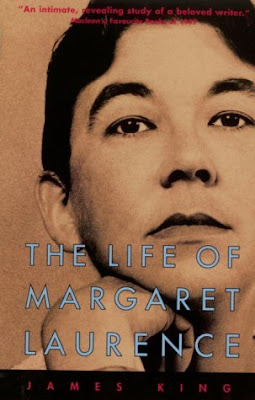 Drawing From a Dreadful Childhood in Neepawa

Jean Margaret Laurence, Manitoba’s distinguished author of “The Stone Angel” and “The Diviners,” was born Jean Margaret Weymiss, on July 18, 1926. Her mother was Verna Simpson, 6th daughter of John Simpson. Margaret’s father was Bob Weymiss, a lawyer who had really wanted to become a carpenter. Her dreadful early life in Neepawa became the source of her writings.

DEATH WAS HER EARLY COMPANION

Death was Margaret’s companion in childhood. Margaret lost her mother Verna at age four. Her aunt Margaret returned from Calgary to help care for young Margaret and slept in a back room. After a year of town gossip, her aunt became her next mother. From then on she would call her new mother mum. At age 9 Margaret lost her father. As a little girl she was made to go see her parents’ graves, surrounded by peonies. From then on she hated that flower.

The other major figure in Laurence’s life was her maternal grandfather John Simpson, a successful businessman in Neepawa. He had come from Milton Ontario as a pioneer and had literally walked the 50 miles to Portage La prairie where he got his start. Simpson was a mean, avaricious man who was respected but hated by nearly everyone. He refused to let his wife go shopping with any money, and he later regretted sending Margaret’s mother to Agricultural College as he did not like the idea of paying tuition for her to “learn how to cook.”

After her father died the family had to sell their house and move in with Grandfather Simpson. Margaret later remarked how the house felt like a cage and her grandfather was a tyrant. She was encouraged in everything she did. She felt different from the other children, an outsider. She became an observer of the lives of others. The war took away every boy in her class by grade 12. As a result, all of Margaret’s memories were of Neepawa as a place of death.

At age 17 she won a scholarship to United College and found an opportunity to meet other budding writers. At age 18 she bought a Remington typewriter for $14 and remarked that her typing course taken at age 14 was the best thing she ever did. She stayed at Sparling Hall and ate at a Salisbury House as well as Tony’s. She had coined the name Minewaka in a short story competition run by the Winnipeg Free, Press.

She married Laurence in 1962 at age 21 and they lived for a while at 515 William above Anne and Bill Ross. For a while Margaret worked at a communist newspaper without knowing it and later for the Winnipeg Citizen. Her husband and the Rosses did not get along as he disapproved of their causes. Her husband was interested in 3rd world development work and after a short stint in England he found work on improving the water supply in Somalia. She wrote first about Africa but later after returning to England in 1962, after her divorce. She had two children.

There she began to write about Manawaka (Neepawa). The Stone Angel came out in 1964. In 1974 she returned to Canada living in Lakefield Ontario. She became a heavy smoker and an alcoholic. In later life she did not enjoy the idea of returning to Neepawa even for short trips. On her rare visits, she refused to walk by the old brick house.

This secretive woman who had decided long earlier that “a life without hope is not worth living,” planned the details of her own funeral, including the timing of her death in Jan 5, 1987, during a battle with cancer.