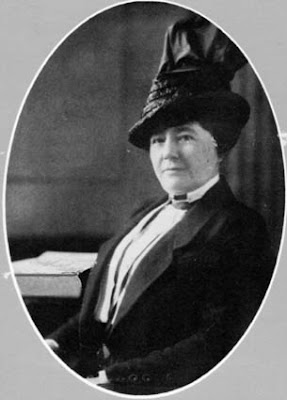 On June 29, 1920 Manitobans elected their first woman member of the Legislative assembly. Edith Rogers had been active in soldier’s relief programs, and was seen as woman capable of bringing women’s issues before the Legislature. She is described as having been a true daughter of the north country in that both her mother and father had strong connections with the Hudson Bay Co. Her paternal grandmother had been the illegitimate daughter of Sir George Simpson.

She was born Edith MacTavish in 1876. growing up at Norway House. She was educated in Montreal. In 1897 she met Arthur Rogers who was a wholesale dealer in fruits and provisions, while on a duck hunting expedition with her uncle. Arthur Rogers began a new dairy business in 1905 called crescent creamery with the active involvement of Edith. The dairy was a success because they paid close attention to hygienic conditions during a time when typhoid fever was rampant.

HOW DID SHE BECOME A PROMINENT WINNIPEGGER?

Edith raised four children and led an active life as part of the social elite. Participating in many luncheons, teas, bridge parties and dinners, Edith Rogers took a special interest in the General Hospital and the Convalescent Home. After WW2 she was very involved in veterans associations helping returning soldiers adjust to civilian life. In 1920 the Liberal party asked her to run as a candidate. Manitoba was the first province to give women the vote that year and it was the first opportunity women had had to vote or to run for office. Three other women ran for office that year.

WHAT ISSUES DID EDITH ROGERS PRESS IN THE LEGISLATURE?

She was very interested in social welfare and pressed for the adoption of the child welfare bill. She also introduced a bill for censorship of motion pictures and a bill giving widows increased power over their husband’s estates. She also represented the government on the Social Welfare Council of Winnipeg. She also introduced a bill to incorporate the Winnipeg Foundation. She was also credited by city of Winnipeg officials for always being willing to secure legislation that solved civic problems.

She continued to serve in the legislature till 1932, after which due to declining health retired in her daughter’s home in Toronto. She came back at the outbreak of WW@ to become chairman of the War Council of the Red Cross. In 1942 she decided to retire to her childhood home in Colbourne Ontario. On the eve of her departure for more than an hour and a half a steady procession of people came to pay their respects at the grand staircase of the legislature. She died in 1947.