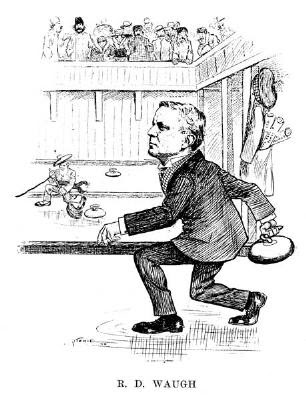 The Mayor That Introduced

Mayor Richard Dean Waugh noted for introducing playgrounds to Winnipeg. Waugh’s efforts resulted in a mass public meeting on May 28, 1908, which led to the opening of Winnipeg’s first playground. Waugh was born in 1868 in Melrose Scotland. He came to Winnipeg in 1883 with his parents after living in Kincardine Ont. for a few years. In Ontario he got an early start working as a purser on steamboat lines.

In 1905 Waugh became a member of the city’s parks Board and its chair in 1907. He worked on a committee that developed cycle paths. Waugh would be a sportsman his entire life and was interested in improving the city’s amenities. He was for good roads and for city beautification. He wanted Winnipeg to become one of the beauty spots of Canada. He was active in curling and head of the Real Estate Exchange.

In 1907 as chair of the Parks Board, Waugh tried to convince council to begin to develop playgrounds as existed in the United States. “Small areas of land fitted with amusement paraphernalia. Skilled instructors with the highest moral training.” City Council refused. In May 1908 a meeting of playground enthusiasts met with Mayor James Ashdown. With Ashdown as the group’s chairman he reviewed how best to reach their goal. Ashdown discouraged them from asking the city once again and instead suggested a voluntary association. During the summer of 1908 a model playground was set up at Central School funded by an $800 grant from the Manitoba branch of the Canadian Council of women. It proved a big success. Seven playgrounds were set up in Winnipeg’s north end in 1909 and by 1920, 20 playgrounds were operating. And for winter play, by 1912, skating rinks were being set up.

Waugh had served several terms on the Board of Control and in 1912 was elected mayor. These were Winnipeg’s glory days with civic growth and prosperity at an unparalleled rate. Waugh proved a popular mayor, but Waugh found that his stint as mayor became an intolerable burden on his private business life. His partner Thompson Beattie who had run the business had perished on the Titanic and now Waugh had to return to private life to rescue his real estate and law business.

Waugh recommended several civic reforms upon leaving. He had seen how being mayor was a full time job. He recommended a 2-year term for mayor and the abolition of a property qualification for those seeking public office. Waugh went to England to help negotiate a loan for Winnipeg, which he discovered, had the best financial reputation of any Canadian City. He also visited his hometown Melrose where he found the towns depleted of young people who had emigrated to Canada. In 1915 Waugh became mayor once again and served till 1916. He left to become head of the new Water District Board. By now Winnipeg’s glory days were nearing an end.