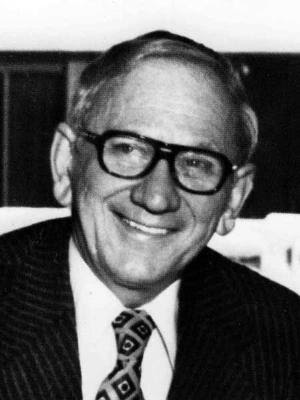 from the wrong side of the tracks”

Steve Juba, became Winnipeg’s first and only non-Anglo Saxon mayor in 1956. He defeated George Sharpe by 2,000 votes and began a colourful era in civic politics. Juba ran Winnipeg for 21 years and never saw any opponents come even close to taking his job away. He withdrew his name from nomination in 1978 consciously ending his own career.

Juba was of Ukrainian descent. He had dreamt of becoming a lawyer but the depression forced him drop out if school. He was a scrounger and business man starting from nothing and finally becoming a millionaire with 2,200 branches of his business, Keystone Supply. He was fiercely independent and operated like a lone wolf. But most of all he was just like the little guy. He continued to live on William Ave even after becoming mayor. And he loved Cadillacs owning 25 of them.

Juba was returned in every election with landslide majorities. The general public seemed to love him, as did the media. But some saw him as a foreigner. One of his opponents was Gloria Queen Hushes who ran against him in 1966. She called him “the barefoot boy from the wrong side of the tracks.” Others like Alderman Crawford offered to raise $100,000 for “the right man” to run against him. He got into public fights with Cabinet Minister Russ Doern making national headlines when he delivered an outhouse to the front of the legislature with a sign describing it as the fitting office of Russ Doern.

Juba led a campaign to reform liquor laws making Winnipeg a modern city. He brought the Pan Am Games in 1967 and ensured it did not cost Winnipeg a single cent by getting the Federal government and the province to pay the costs including the overrun. He was credited with raising substantial funds from the province for city projects like the Disraeli Bridge. He put Winnipeg on the map. He was a big promoter of the city frequently making news across the country. He believed in the potential of tourism and developed the idea of twin cities as a way of encouraging tourism.

Juba was a personality type uncommon in politics. A true individual, he believed that the only way to be truly independent is to not to be beholding to anyone. So he had to become financially independent before he could be politically independent. Juba had a giant ego well suited to the demands on a mayor to create a sense of dynamism and be the showman and entertainer. He truly embodied the general population. He sided with the women who worked to save the Wolseley Elm.

He convinced everyone of the need to rebuild the old city hall by showing people how structurally unsound it was. He took newspaper writers into one of the domes in the old Victorian City Hall and he would make the dome shake by pulling on its flagpole.

So who does an independent politician consult for advice? Juba was known to have had a circle of five people in all walks of life whose advice he sought. One of these is thought to have been Peter Warren. Juba was a true visionary seeing ahead and urging things like casinos, liquor reform, and mass transit options like a monorail. Juba and his wife Elva had no children. His great passion was birds and he spent half of his annual salary of $24,000 buying feed for his special friends.