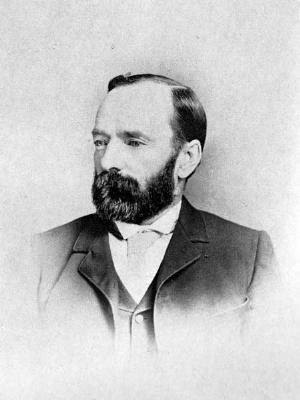 Hardware merchant. Mayor of Winnipeg. Philanthropist. James Ashdown remains one of Winnipeg’s most distinguished citizens. Ashdown was born in London England in 1844 and came to Canada as a young boy of eight. His family settled in Weston Ontario and he later apprenticed at Hespeller, Ontario in the trade of tin smithing. For a while he lived in Kansas but came to Winnipeg in 1868. He spent 44 or 69 days (depending on the source) in a 12×16 foot jail with 21 other men during the Riel rebellion because he had served as one of Schultz’s citizen guards. Ashdown had described Louis Riel as a “strutting peacock who fancies himself a little Napoleon.”

Ashdown made his fortunes starting with Moser’s Hardware a little shop he had purchased for $1,000 in 1869. He renamed it the Winnipeg Tin Shop. It was located at the corner of Bannatyne and Main St. Ashdown’s hardware business would continue to function from the same location for the next 100 years. By 1881 Ashdown was doing business in Emerson and Portage La Prairie and was worth $150,000. He expanded to Calgary in 1889. His buildings and businesses grew and grew with the Ashdown warehouse located east of Main St. seeing four additions in 12 years. Ashdown Hardware served the entire west both wholesale and retail complete with a catalogue division.

In a novel 1900 publicity stunt, Ashdown sent a train of 40 freight cars across every town and village in the Canadian prairies selling straight to the public from the box cars. By 1910 he had become one of Winnipeg’s famous nineteen millionaires. His first house located in Point Douglas was the toast of the town in 1878. His famous house had an indoor bathroom, a furnace and one of the first two phones in Winnipeg. And when industry intruded Ashdown built a new palatial home on Wellington Crescent. Now the Shriners’ Temple.

In 1874 Ashdown was chair of the citizen’s committee that fought for the incorporation of Winnipeg. He also helped organize the Board of Trade, and served as President in 1887. Ashdown invested in many civic minded projects including the street railway system that was being developed by Albert Austin. Ashdown served as mayor in 1907-1908. He was elected in 1907 and won by acclamation in 1908. Ashdown was a practical businessman. He was always careful not to saddle the city with burdens it might not be able to support. He journeyed to England to negotiate good borrowing rates for the city during a difficult time. As mayor, Ashdown was behind many forward looking ventures such as the establishment of evening education classes for adults and compulsory school education.

Ashdown was a director of the Bank of Montreal, Northern Crown Bank, Northern Trust, Canadian Fire Insurance, Great West Life, the City Hospitals Board, the YMCA, Children’s Aid Society, and even the Winnipeg Water District during the time of the aqueduct. A Liberal and a Methodist, Ashdown was also a founder of Wesley College. In his 36 year long association with Wesley College he served as its head for 16 years and he gifted Wesley his favourite institution over $100,000.

JH was one of those that recognized the importance of volunteer community associations as a way of providing needed improvements. Ashdown was always concerned with fiscal matters did not want to rely on the government of the day to meet all civic and community needs. Ashdown was one of those men that was building a future for himself and for his family in Winnipeg. What was good for Ashdown was also good for the city. His personal ambitions and successes fuelled the city’s growth. Ashdown was the “Richardson” of his day. When he died in 1924 he had left $380,000 of his $1.7 million estate to charity. Some included the Winnipeg General Hospital, the Children’s Aid Society, the Salvation Army, the Winnipeg Boys Club and the Winnipeg Free Kindergarten.

◀ Premier Walter Weir
THE LAST RUN OF STREETCARS IN WINNIPEG ▶