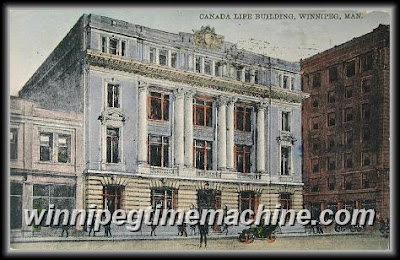 Hall was born in Guelph Ontario in 1850, the youngest of 11 children. He had worked in business in Ontario and New York and moved to Winnipeg in 1879, going into a partnership with Captain GF Carruthers who was active in insurance and finance. Brock was a great promoter of Winnipeg and a very astute businessman. He had come to Winnipeg to stay and to build a future.

He survived the 1883 real estate bust and the lean 1880s that followed seeing the effects of eastern policies on the west. High insurance rates and the difficulty of obtaining financing were growing problems in Winnipeg. Brock recognized the importance of having the accumulated capital from insurance premiums, stay here to develop the west, rather than going to foreign or eastern companies as was typical.

GWL was founded in 1891 at which time half the $8.4 M premium money left the country. And of the 40 insurance companies in Canada, only 9 were Canadian, and none were based on the west. A strong insurance company in Winnipeg would tend to prime the financial pump.

HOW DID BROCK’S VENTURE GO?

Great West Life was incorporated August 28, 1891, and it had leading citizens like James Ashdown on its board. Brock’s goal was to take in $1,000,000 in premium money in the first year. Brock had been told that his dream of a Winnipeg-based insurance company would not fly, that he was dreaming the impossible dream.

“An absolute impossibility” other insurance men had said. But Brock was able to report at their first annual meeting that they had indeed sold $2.7 Million. GWL went all across Canada in 1896 and in 1906 it opened its first office in the US in Fargo North Dakota. By 1907 it was the top company in Canada and it had 100 employees in Winnipeg and 600 agents across the country.

The effort to create local institutions tended to stabilize Winnipeg’s status as an emerging commercial centre. Banks and other local financial companies flourished during Winnipeg’s fabulous decade between 1906 and 1916.

At first agents were cautioned to sell only to people of good character and in 1894 they refused a policy to man that had deserted his wife and family. GWL recognized the opportunity of selling to women by 1898 and by 1913 had established a department for womens’ sales. By 1920 a Mrs I A Jones of Toronto had become a top seller.

Agents worked an average of 13-14 hours a day and till the 1930s, most of their sales were in rural areas. One agent reported seeing 72 people in one strenuous week and selling 29 policies. Agent FC Kerr of North Battleford started to use a snowmobile in 1927 because he did not want to lose winter business. Another agent was Claude Dunfee who in the early 1920s had his car converted into an office. He would park in a prominent location on the town’s Main street and sell policies right from the car.

GWL’s first death claim was in 1893, from a bicycle accident. The policy paid out $1,000 which saved the policyholder from destitution. In the Titanic disaster GWL paid out to two policy holders of the 1,100 that were lost.

It was now time to build a suitable office building expressing the Great West Life’s prominence and this was realized in the outstanding Great West Life building on Lombard Avenue built in 1911 and designed by John Atchison. GWL went on to build two other major buildings to accommodate its staff. Each was reflective of architectural styles of the time, but neither of its newer buildings come close to the elegance and grace of its Lombard Ave location.