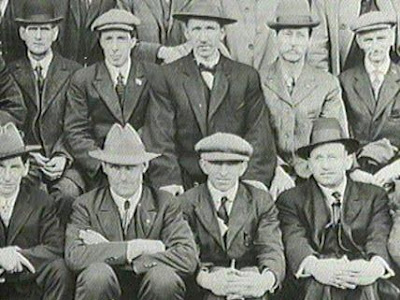 On November 24 1919 labour leader RB Russell went on trial for seditious conspiracy during the 1919 strike. Of all the participants in the strike Russell paid a high price spending a year of his two-year sentence at Stony Mountain.

Robert Boyd Russell was born in 1888 in a working class district of Glasgow Scotland. His father was a staunch socialist and he grew up a rebel. RB became immersed in the world of the socialism and shared his father’s concern for social problems. In 1911, seeking better fortunes, he arrived in Winnipeg where he soon found a job as a machinist in the CPR shops. He married his childhood sweetheart who had also emigrated along with her brother and RB.

LABOUR POLITICS
He soon became involved in the Machinists union and in the Socialist Party of Canada. He was cautioned for his unpatriotic views during WW1 where he called it a capitalist war. Russell was a committed Marxist who did not believe in partial solutions offered by people like Fred Dixon, who Russell saw as weak. Conditions and pay in Winnipeg were lagging behind the cost of living. The cost of living had gone up 75% between 1913 and 1919. Average pay was $900 yet it was estimated that $1,500 was needed to feed a family. Russell helped establish half day Saturday work hours in western Canada. He believed that the working class was destined to rule the world. He railed against the more moderate reformist Winnipeg Labour Party. After the Russian revolution RB began to address his colleagues “comrade.” And he worked to establish the One Big Union.

RB RUSSELL ON TRIAL
RB became the leader of the 1919 strike and was arrested. He went on trial on Nov 24. The crown was unable to prove that he had tried to bring about a Bolshevik revolution. His lawyer contended that RB had only used colourful language and that he was being taken too seriously. Revolution was just another word for change or for normal evolution. Russell was found guilty and on Christmas eve 1919 RB was sentenced to two years in prison. But first Judge Metcalfe sent RB home to celebrate Christmas with his family. The next day the police came hand cuffed him and took him to Stony Mountain. He was freed a year later on Dec 11, 1920.

Russell continued to work on the idea of the One Big Union. But it did not materialize as workers in western Canada and later in Winnipeg failed to support it. Russell ran for federal election under the Independent Labour party in 1926 in St James but was soundly defeated. He then turned his attention to organizing restaurant workers. The One Big Union officially wound up in 1956. Russell then saw appointment to the Manitoba Labour Relations Board, the Fair Wage Board, and served on community groups like the Community Chest and the Cancer Research Board.

HONOURING THE GRAND OLD MAN OF LABOUR
Russell waited a long time before his contributions to labour were recognized by the entire Winnipeg society. On Labour Day 1964, RB Russell was honoured by receiving his address of appreciation from the Manitoba Conservative Govt. Russell sat at the front of the Labour Day Parade like he had done many years before. He died a few weeks later on Sept 25, 1964.

On April 4, 1967 the cornerstone was laid on RB Russell Vocational school. The school’s official opening was attended by RB’s wife Margaret, daughter Margaret and son David. The Winnipeg Labour Council also unveiled a plaque to RB Russell recognizing his work as a labour leader and activist for vocational education.