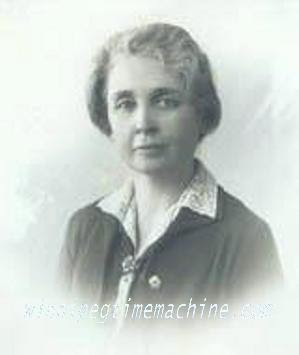 Winnipeg’s First Lady of the University

Mary Speechly was born Mary Barrett in London England in 1873. Her father was a schoolmaster who wanted Mary to receive a good education. He was concerned that the local girl’s school was “too feeble,” and instead had her attend his boy’s school. She would be the only girl among 80 boys. It was clearly not a time when the education of women was considered important. And she was denied access to higher mathematics, science, carpentry and sport.

In 1889 she won a scholarship to University College in Liverpool where she received a degree in classics. She later attended Cambridge University where women formed only 10% of the population and were not permitted degrees except through arrangements with lower colleges. She married Henry Speechly, a doctor, in 1895, and they came to Manitoba in 1901.

LIVING IN PILOT MOUND
Dr Speechly arrived at Pilot Mound 8 months ahead of Mary at a time when it was still a pioneering community. Mary had obtained training as a professional photographer and practised as Pilot Mound’s only photographer for the first few years. She found taking pictures financially rewarding and a great way of meeting local people. Mary Speechly found the first few years very difficult in pioneering Manitoba with no running water, no electricity and no phone. But their house was frequently full of people. And Mary found that she had to be not only a nurse to Henry’s patients but also a cook as well as patients brought their families and they sometimes stayed for hours. She educated her daughter herself till age 14.

Mary became involved with the school board and noticed that the area’s young women knew nothing of cooking or sewing. She found a travelling teacher who would teach these simple homemaking skills. Mary Speechly went on to become one of the founders of the Women’s Institute. She became very active in the area’s Agricultural Council, played the church organ, was church treasurer and sat on many committees.

THE MOVE TO WINNIPEG
During WW1 Dr Speechly went to serve in England. By 1916 the family had moved to Winnipeg and they would reside at 232 Home St. for the rest of their lives. Dr Speechly became famous as Winnipeg’s coroner and the man who in 1925 campaigned for the introduction of mosquito abatement.

In Winnipeg Mary Speechly became involved in many educational and family causes. She founded organizations like the Birth Control League, which helped improve the lives of Manitoba women. The Birth Control League was founded in October 1933. She worked tirelessly for the Red Cross, the Community Chest, and the Anglican Church. It was her work in relief where she recognized the problems brought about by large families that led to her work with the Birth Control League. It was work that at that time was against the law. She was the first woman to be appointed to serve on the Agricultural College Council in 1927. Later she continued to serve on the University’s Board of Governors 1933-1947. In 1947 she received an honorary Doctor of Laws degree. In 1964 the new Women’s Residence at the University of Manitoba was named Speechly Hall.

THE SPEECHLY FAMILY
Mary and Dr Speechly lived at their famous white columned home where they raised three children. Their oldest son William Grove taught at Gordon Bell high School. Everyone who went to Gordon Bell in the 1960s will remember Mr. Speechly as “The Chief” and how entertaining his geography classes were for all the boys in the “Mob.”

Local newspapers continued to honour Mary Speechly well into her nineties dubbing her Winnipeg’s First Lady of the University. In 1963 at age 90 she was reported to still be caring for bachelor son William. She would walk a mile to do her shopping. She needed no glasses and she still had all of her teeth. She lived to 95 and died Nov 7 1968.