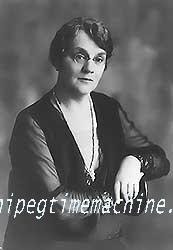 LILLIAN BEYNON THOMAS
In the decade between 1907 and 1917 she was one of the most influential women in Canada. As a writer for the Winnipeg Free Press and the Prairie Farmer, Thomas raised the consciousness of women. She was also one of the founders of the Political Equality league which fought the Roblin govt for the right to vote.

Lillian Beynon was born Sept 4, 1874 in Kings Ontario. Her family moved to Hartney in the south west corner Manitoba in 1884. After her father’s death, her family moved to Winnipeg, and she received her Normal School certificate in 1896. In the next nine years she taught in various rural Manitoba locations developing a compassion for the lives of rural women. In 1905 a time in which women were only 11% of all college graduates, she received a Bachelor of Arts degree from Wesley College and began teaching in Morden.

BECOMING A WRITER
It was John Dafoe of the Free Press who gave her a chance to write in 1907. It had been her life-long ambition. She wrote under the pseudonym Lillian Laurie and the column was called “Home Loving Hearts.” Her column was not about how to be beautiful nor how to win a husband. Instead she told stories about women who had been abandoned, mistreated, and who had no legal rights to children. She began to be an advocate for social reform, for dower rights, and for temperance as she had seen how many farm families had been torn apart due to liquor. Thomas, well ahead for her times, also supported unwed mothers and illegitimate children. She soon realized that obtaining reform would come only after women had secured the right to vote for reform.

THE SUFFRAGETTE’S FIGHT
Manitoba was ahead of other provinces in lobbying for the right to vote. This was attributed to the Icelandic women that had come to Manitoba who had enjoyed the right to vote in their home country. The fight to ban the booze had started in 1885 and by 1893 the Women’s Christian Temperance Union took up the voting issue.

In 1906 women who owned property were allowed to vote in municipal election. But the Manitoba government fearing they would vote in prohibition, in which the govt had a vested interest, took away their right to vote. This move strengthened women’s resolve to pursue the vote. Thomas continued to write and was instrumental in the establishment of homemaker’s clubs throughout Saskatchewan.

LEGISLATIVE BUILDING SCANDAL GIVES WOMEN AN OPENING
In May 1915 Roblin’s govt fell after the scandal over the escalating costs of building the legislature. TC Norris the new premier promised women the vote. Lillian Beynon Thomas was also an advocate of social concerns. In 1912 she initiated a campaign to get nurses into rural areas and arranged for the exchange of care parcels between have and have not Manitobans. She gave exposure to the work of JS Wooodsworth.

WHAT HAPPENED TO LILLIAN BEYNON THOMAS
In 1917 she moved to New York with her husband AV Thomas where she studied short story writing at Columbia University. In 1922 they returned to Winnipeg were she began work for the Tribune. She also began to write plays and found great sucess in this new carreer. She died Sept 2 1961 at age 77.