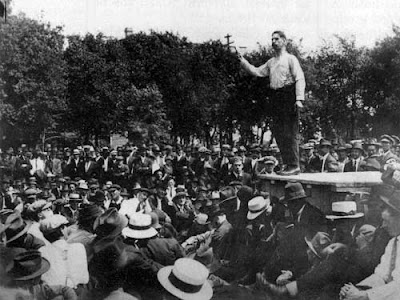 The Radical Orator of Market Square

No event has polarized Winnipeg more than the 1919 strike. On May 15, 1919, 12,000 union members walked off their jobs and were joined by another 12,000 unorganized workers, effectively shutting down all business activity in Winnipeg. “Thursday May 15, 1919 is a date that will live long in the history of Winnipeg” declared the leaders of the Winnipeg General Strike.

In less than two hours the whole productive industry of an entire city was tied up. Not a wheel was turning in the big plants, not a street car was visible. Workers were convinced that their cause of improved wages, the right to bargain as large groups and to organize politically were just causes. Businessmen and government leaders felt they were seeing the beginning of a revolution and an effort to establish Bolshevism.

The youngest of four children, George Armstrong had been born on a farm near Scarborough, Ontario in 1874. His parents were of United Empire Loyalist stock. Armstrong moved to Winnipeg in 1905. He worked as a master carpenter and rose to become business agent of the carpenters’ union during WW1. He was also one of the founders of the Socialist Party of Canada.

How Armstrong became a socialist after being brought up on the farm was a mystery according to RB Russell. Armstrong was a Marxist who saw revolution inevitable. He saw a growing gap between the rich and poor and preached opposition to all forms of private property as a way of abolishing exploitation of the workers. He believed that the capitalist system had to be replaced and could not be reformed. Armstrong did not find common ground with moderates and had nothing but scorn for anyone who thought they could improve capitalism. Armstrong actually expected the working class to rise up and take over the levers of power in Winnipeg. But he never preached violence.

He was a “rough and tough kind of speaker, always handing out the Marxist line” according to Fred Tipping. “A big man with a voice to match.” And when Armstrong tired, his wife Helen would take over with “her shrill anti-capitalist vituperation.”

Mrs Helen Armstrong was also active in union activity and had helped organize the retail sales clerks. She had been born Helen Jury, the daughter of a socialist tailor from Toronto. Helen served on the Winnipeg Women’s Labour League and worked on the General Strike Committee.

Armstrong was under police surveillance and on June 17, 1919 he was arrested. His house on Edmonton St was searched. The police found no guns; just some revolutionary literature. After the strike Armstrong was charged with seditious conspiracy, brought to trial and was imprisoned along with John Queen, William Ivens, RE Bray, Richard Johns, William Pritchard and RB Russell. Armstrong’s lawyer had pleaded for British justice and the freedom of expression. He asserted that Armstrong could not have lead such a diverse collection of people such as are found in the labour movement. Armstrong was found guilty of sedition and sentenced to a year on a Manitoba prison farm.

One of the jail guards was overheard referring to Armstrong’s group in jail: “Seditious conspiracy? My god you fellows can’t agree on any one point.” Upon release he took the seat to the Manitoba legislature to which he, Ivens and Queen had been elected. Armstrong was elected as the only Socialist Party of Canada member to sit as an MLA till 1922.

After the mid twenties the Armstrongs faded away from labour activity. His entire family including his three daughters and their families moved to Chicago en masse. In 1945 he and his wife retired to Victoria. Helen died in 1947, George lived to 86 and died in 1956 in California. Did the authorities over react in the 1919 Winnipeg Strike? Had Armstrong been a threat to peace and order? Would he be a threat today? What role did the strike play in the decline of Winnipeg?