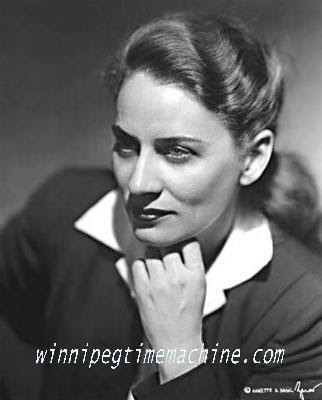 GABRIELLE ROY
Born in St Boniface, Gabrielle was the last of 8 children born to Leon Roy and his wife Melina Landry. In March 22, 1909, the year of her birth, her dad was 60 and her mother 42. Her dad was dismissed from his civil service job just prior to retirement thus losing his pension, plunging the family into genteel poverty.

Gabrielle attended St Joseph’s Academy where she was taught in the French language. For the next five years she achieved the highest ever standing in French. She graduated in 1927 with a enough scholarship money to go anywhere she wanted to. She chose normal school. And after graduation taught in rural areas before returning to teach in St Boniface. But she wanted more. She wanted to experience her parent’s homeland in Quebec.

With eight years separating her from her next sibling, Gabrielle spent a lot of time reading in her book filled attic where she looked out at over the early St Boniface of the 1910s and 1920s. She dreamed of becoming a writer. By age 10 she had written her first play, and during the summers after this, neighbourhood children would mount productions of her dramas. She joined La Cercle Moliere in 1935.

She lived in Manitoba about 30 years choosing to travel or live in Quebec after 1939. In 1937 Roy left Manitoba to study abroad and in 1939 settled in Quebec.

JOURNALISM AND WRITING
She ran out of money in Europe and returned to became a journalist in Montreal writing about agriculture. She also wrote about social issues and poverty in Montreal. The journalism supported he while she worked on her first novel over a period of more than four years.

Her first novel, “The Tin Flute,” was published in 1945 and brought her literary fame. It won a French Prix Femina, the Canadian Governor General’s Award and was the book of the month pick in 1947. The Tin Flute proved to be both a popular and a critical success and was considered the “first volley” in Quebec’s Quiet Revolution. It is about a poor girl who lives with her mother during WW2. Because the girl becomes pregnant, it caused quite a stir and created a scandal. It was banned in Manitoba but apparently the ban brought it even closer attention according to a Catholic priest who said that he and his colleagues then knew they had to get it.

Most of her writing was set in Manitoba and was influenced by the prairie landscape. Known for a simple style she was able to make the everyday details of life interesting. For the narratives Gabrielle relied on her mother’s vivid descriptions of her life. Both parents were great storytellers that regaled young Gabrielle of their early pioneering years homesteading in the Pembina Triangle near Sommerset.

Returning to St Boniface to care for two ill sisters, Gabrielle met Marcel Charbotte, Cercle Moliere President, with whom she fell in love. They left for Paris where her new husband pursued medical studies. But their life as a couple was not happy. It is not generally known that she married a gay man.

Finally in this different place, Gabrielle started to write novels about Manitoba. She was stunned by the controversy over a foreigner winning the French Prix Femina. They returned to Canada in the early 1950s and settled in Quebec City living on the Grand Alle. But in Quebec she felt an outsider and once again Quebecers were resentful of a book written by an outsider. And she did not like the nationalism of Quebec.

Gabrielle Roy died in Quebec city in July 1983. The home in which she grew up is still standing at 375 Deschambault St. Members of the St Boniface community are working to create a museum there one day. One of her sisters Adelle, better known as Marie-Ana, is still alive at 105 years of age.

Ironically Roy fought for acceptance outside St Boniface, in the other French communities. The French were annoyed that a foreigner won their Prix Femina, while the Quebecers about whom she wrote, resented her, an outsider, depicting the Quebecers to the rest of the world. She found Quebec and insular place that made her feel like an outsider.