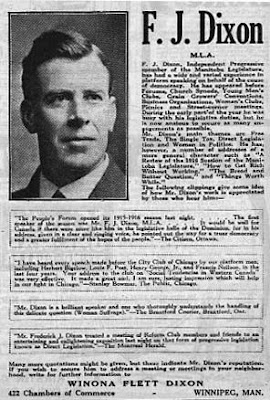 “A Man of the Common People”

FRED DIXON
Frederick John Dixon, labour leader and politician: Socialist or pragmatist reformer? He was born in Englefield England in 1881. He left school at 13, despite a high intelligence and urging by his village minister to support him in higher education. Dixon became a gardener. He found life a struggle and decided to come to Canada joining his brother George in 1903.

Dixon, a large muscular man, found work as a labourer working with a pick and shovel on the brand new Winnipeg Eaton store. He discovered the Mobious bookstore a circle of reform minded thought including people like Ivens, Stubbs and Farmer. He took up Henry George’s notion of the single tax, the hot topic at Mobius’s bookstore. In 1906 they began the Single Tax league. Taxes would be placed on land whether tit was productive or not.

SHAPING HIS POLITICAL THINKING
Dixon read Karl Marx and did not believe a single line. He was not a communist. He probably was not a socialist. He believed in personal freedom, coming from a sense of social security and economic well being. He distrusted bureaucracy and its resulting loss of freedom. Public ownership was a second principle of the single tax movement.

Fred Tipping described Dixon as more of a small “l” liberal and a reformer rather than a labour man or socialist. He wanted immediate and direct solutions not the distant promise of social reorganisation. Dixon became a proponent of the Direct Legislation League and worked as a publicist for this organisation. The league also counted on men like James Ashdown and other non-socialists who wanted action.

A consensual man he offered his support to Tobias Norris who agreed not to run a Liberal in his s eat and Dixon was elected to the legislature. Dixon married one of his co-workers Winnona Flett and enjoyed a celebration at the Fort Garry hotel and later vacationed at Banff. The year was 1914 and Dixon went after the conservative govt legislative building scandal. The conservatives were thrown out of power and in came Norris with Dixon’s pragmatic support on issues like the Minimum Wage Act and Workmen’s Compensation.

DIXON THE PACIFIST
WW1 became a difficult time for a man of conscience like Dixon. Opposed not only to war but also opposed to conscription Dixon was called a traitor and assailed both verbally and physically for his position. A Free press reporter who went over to congratulate him for one of his speeches in the legislature, was promptly fired by the paper. His brother George did not return from Flanders’ Fields.

BECOMING INVOLVED IN THE STRIKE
Dixon was a speaker during days preceding 1919 strike and became a reporter with Woodsworth for the strike newspaper. Dixon wrote those famous words, which describe the moment of the strike and the famous “Bloody Saturday.” Later edited the “Enlightener” while in jail. He was released till his trial and Dixon took his seat in the Manitoba legislature. He spoke on behalf of the strike leaders and many other “illegal aliens” who had been arrested.

DIXON DEFENDS HIMSELF
Dixon had gone to visit an old lawyer buddy Stubbs in Birtle, where he picked up legal expertise which coupled with his oratorical skills he used to defend himself from charges of seditious conspiracy. He argued he was not part of the strike. Came along outside it. He was persuasive and was later found not guilty. He argued for British justice, presented himself as a reformer, and claimed religious teaching and not political action as his motivation. Waxing quite poetic he asked that he be extend the privilege of free speech. Judge Galt warned Dixon against any more future transgressions and he was released.

Dixon became leader of the Independent Labour party distinct from the Socialists and the supporters of the One Big Union. In the 1922 election the United Farmers of Manitoba came to power and asked Fred Dixon to be their leader. He refused and John Bracken head of the Agricultural College reluctantly took over.

A SHORT POLITICAL LIFE?
And then quite suddenly in 1923 he resigned from politics. He had been pursued by all parties including the Liberal, or to be mayor or run in a federal seat. To support himself he sold life insurance for Confederation Life.

Why leave politics so suddenly? Dixon’s personal life had become quite tragic. His young son died and then so did hid wife. He was discovered suffering from cancer. Then in 1924 another child died, followed by his mother in law who had helped with care of the children. He died March 18, 1931 just past his 50th birthday. James Woodsworth returned to conduct the funeral.