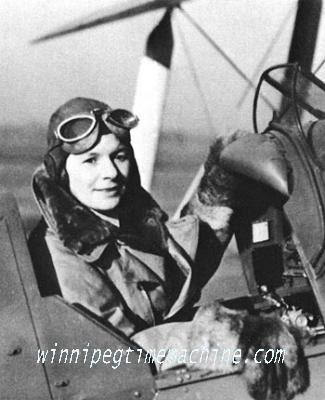 In mid November 1928, Eileen Magill, Manitoba’s first woman aviatrix was taking to Manitoba skies with the first pilot’s license ever granted to a woman. She was born in Nova Scotia April 18, 1906. Her parents came to Winnipeg where she graduated from the University of Manitoba in May 1928 as an honours student in French and Philosophy. Eileen Magill was a different kind of lady for her times. She smoked, she wore slacks, she drove a fast car and she dreamed of becoming an aviatrix.

LEARNING TO FLY IN 1928
Magill applied to the newly opened Winnipeg Flying Club and learned on a DeHavilland Moth a plane with open sides. Her teacher was Michael de Blicguy, and it all took place at newly named Stevenson Airport (now Winnipeg International Airport.) Back then it cost $9-$17 dollars per hour of instruction, and $180 to $240 for a private pilot’s license.

Eileen Magill was awarded her license on October 28, 1928 and became the second woman in Canada to become an aviatrix. Another Eileen, an Eileen Volcock from Ontario had been the first just nine months earlier. Under the terms of her Manitoba license Magill faced several restrictions. She was not permitted to fly commercially or take passengers until she had put on 10 flying hours.

FIRST MANITOBA WOMAN ON AN INTERNATIONAL FLIGHT
Eileen became a member of the new flying club and soon joined three men pilots for a good will flight to Minneapolis. They were seen off by the premier, and other civic dignitaries. Magill’s group of flyers stopped to meet mayors from Grand Forks, Fargo, Crookston. But on their last leg on the way to Minneapolis, she encountered fog forcing the group to land in a field. They walked to a highway, and flagged down the bus to Minneapolis to the relief of the authorities waiting their arrival and thinking the worst.

A NATURAL FOR THE AVIATION BUSINESS
She tried to get a job with the Dept of Civil Aviation. She came highly recommended had a pleasing personality but at a time few women worked outside the home, was turned down for the job. Within her first year she had logged 57 hours and 33 minutes of flying time. And then she quit. Just like that. She married Rene Cera and moved to Woddbridge Ontario where they had one son. She lived to age 58 and died at Lennox Massachusets in 1964.

FRED STEVENSON
Winnipeg’s airport was named in honour of Captain F J Stevenson who died in January of 1928 after having received the Harmon trophy for commercial aviation in 1927. Stevenson had been born in Parry Sound Ontario but grew up in Winnipeg. He had destroyed 18 enemy aircraft and 3 observation balloons while with the RFC. Stevenson flew the first commercial shipment: 23 tons from The Pas to Sherrit Gordon mines in 1927.