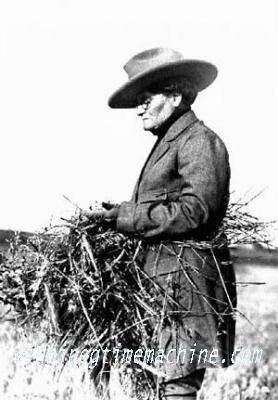 Cora Hind came to Winnipeg in 1882 while it was still a small frontier town. She was an orphan who was brought up in by her grandmother on a farm in Artimesia Ontario. She arrived full of dreams of a bright future for her aspirations to become a newspaper woman. This was time when there were none and when most women chose the path of teaching. William F Luxton editor of the Free Press at the time told her that the newspaper business was not made for women especially with the late hours and the not so nice people.

A lawyer advised her to become a typist and she rented a typewriter and taught herself how to use it. For more than a decade she worked as a typist, but she did not give up on journalism. She decided that on her own she would become knowledgeable in agriculture. By 1893 she had her first piece published: an article on dairy production. Twenty years after she had first applied to the paper, she was finally hired by the Free Press to do the job she had always wanted to do: report on agriculture.

Agriculture is such an uncertain business as far as how good the crops will be at harvest time. Having data from which to make educated guesses is what distinguished Cora Hind from everyone else. She was willing to go out in many parts of the province and check crops for herself conducting her own agricultural surveys. She dressed in her military style clothing with britches high boots. She drove herself all over the province where literally no man had gone before. The result was there was a level of confidence in her predictions.

In 1898 for example there were predictions of a crop failure Cora was able to predict an average harvest. She went right into the fields, rubbed and felt the wheat kernels in her hand and counted the kernels. In 1901 Cora was appointed agricultural and commercial editor for the Free Press. Her crop estimates became the standard by which this kind of work was done. She showed her abilities again in 1904 a year in which they Chicago experts predicted a crop of only 35 million bushels due to fear of black rust. Cora went out and checked things for herself and predicted a crop of 55 million bushels. The Chicago experts thought she was nuts till the crop actually came in at 54 million bushels. Her status as an expert was forged that season. In 1924 she travelled 10,240 km over 37 consecutive days making 30-50 stops a day to check crops.

Cora was front and centre in the women’s movement and worked on poverty issues with Amelia Yeomans and voting issues with Nellie McLung.

Her colleagues are said to have paid her the ultimate compliment. “The best newspaper man in Winnipeg is a woman: Miss E Cora Hind.” In 1935 she received an honourary degree from the University of Manitoba and the Free Press awarded her a round the world trip. In her 70s she took the trip and made a busman’s holiday by reporting on agriculture around the world. Cora Hind died of a stroke at age 82.