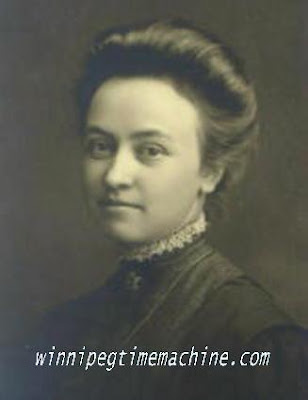 AGATHA WIEBE
Two Mennonite women pioneered health care: Agatha Wiebe is thought to be the first Mennonite registered Nurse in Manitoba, and Maria Dueck Ginter, Chiropractor. Agatha’s grandparents were amongst the early Mennonite immigrants to Manitoba. They arrived in 1875. Her brother Dr. Cornelius Wiebe from Winkler who died recently was one of the oldest Manitobans alive. He was also the first Mennonite MLA in Manitoba.

Agatha was born in 1887 one of 5 daughters and four boys to Peter P and Anne Wiebe at Weidensfeld near Rosenfeld. Agatha lost two of her young sisters to diphtheria. She left school at age 11 to help at the farm and by age 17 had become quite ill. Her doctor advised her to stop the strenuous farm work and to return to school, which she gladly did finishing grade 11.

At age 24 she decided to study nursing at St Louis Missouri Evangelical Deaconess Hospital. Her father who took her to St Louis and warned her that it would be the last time they could afford to see her till she graduated. In 1914 she completed her RN and returned to Winnipeg where she had to substantially re-qualify by meeting Canadian requirements at Winnipeg’s King George Hospital. After completing this period she began work at the Ninnete Sanatorium caring for TB patients where she rose to head nurse.

At age 40 she married Frank Thiessen a widower who had lost his first two wives and who already had 11 children. Nearing her mid forties Agatha proceeded to have two of her own children. Her nursing career was now over. They lived at Lowe Farm for the next 23 years. Agatha retired to Steinbach and later to Winkler were she lived to age 92. But where Agatha left health care in middle age another woman was just beginning.

MARIA DUECK GINTER: CHIROPRACTOR
Another Mennonite woman Maria Dueck Ginter pioneered as a female chiropractor. And she did so later in life starting in her fifties. She was the daughter of Deitrick and Agatha Dueck and the second of seven children. She was widowed at age 29 and left with three children. With the help of the community and a $45 per month social assistance allowance Maria kept her family going till she remarried four years later.

She learned the chiropractic art from her father who was a chiropractor, auctioneer, dentist and trapper. She was known as “the special woman with a special gift.” Her living room would be full of people awaiting her talents every evening. One of her popular treatments was a bear fat massage. She would relax her patients before working on them by using hand held vibrators and a vibrating chair.

Being unlicensed, Maria could not ask for a fee but many people would leave some meat, vegetables, or clothing and some nothing at all. It is said she helped a 12-year-old boy, who had not walked in 2 years, walk again after one of her treatments. Maria spent her entire life in Rosengart living to age 81. She died in 1990.