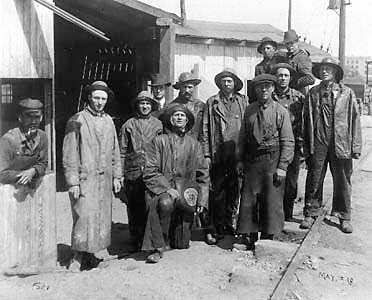 civic politicians preferred to keep studying the problem of water”

On April 5, 1919, Winnipeggers turned on their taps and began to enjoy the first fresh water flowing from the Shoal Lake Aqueduct. Getting clean, safe and abundant drinking water was a problem at the turn of the century. Private operators like the Winnipeg Water Works Company supplied water drawn right out of the Assiniboine River taken from the current site of the Cornish Library. But the water from the Assiniboine got worse and worse showing high faecal bacteria counts even then. The result was relatively high death rates from Red River fever in 1904, when Winnipeg set a world record of 19.4 deaths per 1000.

Starting in 1906, water was pumped from a system of artesian wells. But the water was very hard and not abundant enough. The search was on for a better supply. But through the 1900s, Winnipeg politicians avoided coming to terms with the water issue. The City’s engineering advisers in 1907, had recommended the far cheaper Winnipeg River scheme. These were tough years for Winnipeg tax payers. They were just in the midst of building the Point Du Bois Power Plant. The city treasury was strapped.

In studies done in 1912, US consultant Charles Slichter identified Shoal Lake as having a perfect water supply worth all costs of developing a totally new water system; a substantial $13.5 million! Charles Slichter was a PhD, a professor from Madison, Wisconsin, and an international authority on water who had already advised Brooklyn NY, Los Angeles, St Louis, El Paso and Holland, on their water supplies. Slichter’s argument was based on the city’s rapid growth and on the future importance of Winnipeg. “Winnipeg has entered into a class of world cities. It cannot afford to be committed to a temporary solution and it should not postpone the inevitable.”

HOW THEY DECIDED TO SPEND THE BIG BUCKS

There was a lot of debate. First Mayor Waugh was for it but then he had a lot of questions. Councillors were falling over one another finding fault with Slichter’s report.

Alderman Crowe warned water costs would go up five times, and wanted to keep studying the issue. Councillor Douglas also feared for the costs. Meanwhile, City Engineer Ruttan remained a strong advocate of the alternate scheme of getting water from wells north of the city.

Only one man showed vision and was able to see through this political fog of uncertainty. It was Councillor Thomas Russ Deacon who argued strongly in favour of Shoal Lake. Despite the cost! Deacon, an engineer, was the President of Manitoba Bridge and Iron Works. He had lived near Shoal Lake for ten years and was aware of its high quality and abundance. He felt it was Winnipeg’s destiny to become a great city and the matter of high initial cost would be taken care of by future growth.

It was a year of recession and city budgets were strained. But Winnipeggers were convinced of the need to do the right thing. In October of 1913 they voted in favour of the Shoal Lake Aqueduct expenditure of $13.5 million. Deacon’s leadership was well received, and at the same fall vote, Thomas Russ Deacon was elected mayor of Winnipeg.

Work on the Shoal Lake aqueduct began right away. It took five and a half years and ate up all of the $13.5 million, but on March 29, 1919, the work was completed. The newly introduced water was allowed to settle for five days in the reservoir so that citizens could have an appealing clear water on the official inaugural day of April 5. Deacon’s contribution was recognized by naming the first major water reservoir after him.

AND JUST HOW GOOD WAS THE QUALITY OF WINNIPEG’S WATER?

People loved it. Winnipeg’s water was considered the best in the country, and Winnipeg became the “Official Water Supplier” for the 1937 Royal Tour of Canada. It came out at the top of 100 waters in Canada. Today the water is considered to be of high quality. Treatment is anticipated in the near future, particularly as the public’s expectations increase.

The aqueduct was a significant engineering feat and was called the “Rome of the West.” A railway was built to provide access along the route which lacks a road. The aqueduct is simply a concrete tube 156 km long. Since the source at Shoal Lake is 294 feet higher than Winnipeg, gravity brings water to the edges of the city where it feeds four water reservoirs. The main reservoir is named the Deacon after the mayor.

The best part of it is that this 76 year old system still works. We have gone from a population of 200,000 when it was built to a city four times the size and with modern appetites. It still delivers 80 million gallons per day as originally designed. Today the average person uses 480 litres per day or 106 gallons.

Deciding to spend the $13 million it took in 1913 has given us a legacy, and an asset, not the debts and indecision we leave today for future generations. The Shoal Lake Aqueduct’s equivalent value today is about $270 million. No treatment is done excepting fluoridation (started in Dec 28 1956), and chlorine which is added to keeps bugs down.

And while expansion is anticipated during the next decade, water conservation can postpone needed upgrading by 1 year for every percentage reduction in usage. If this is not enough, engineering studies have considered alternative sources like Lake Natalie, ground water from Sandilands and even the Assiniboine. But Shoal Lake is likely to remain the future source.

Conservation coupled with prudent maintenance of the system seems the most cost effective choice of all. And differential water rates should be considered to encourage conservation and to fund future capacity. Perhaps the people who water their lawns regularly, even on rainy days, should be paying at a much higher “future rate” of what it would cost to expand the capacity.