HOW WINNIPEG WON THE 1967 PAN AM GAMES 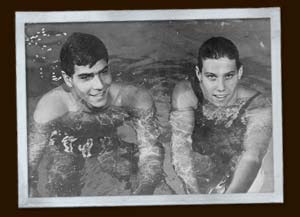 In the winter of 1958, Mayor Steve Juba made his surprise bid to host the 1967 Pan Am Games. It was shortly after Steve Juba had been elected mayor. Juba tells the story of being in Chicago in February of 1958, and dropping in to see his old friend Mayor Richard Daley while passing through town. Daley, holding the Pan Am flag, told Juba that he was in trouble because Cincinnati had defaulted on holding the Pan Am Games and the responsibility had fallen to Chicago. The press were waiting outside for Daley to make his announcement. What should he do?

Juba told Daley to go out there and unfurl the flag and Juba would hold one end while Daley would hold the other end. “And we’ll tell them I’m bidding on them the next time around.” Juba confessed he didn’t know the Pan Am Games from Pan Am Airlines. He thought this would be a local announcement and that he would not really need to act on it. But the next day the whole country knew and Juba was being congratulated for his efforts. Jim Daly the man who would become executive director was the first to call to congratulate Juba.

Juba had no money to work with. He got the Royal Bank to put up a $10,000 deposit and made it clear to them that there was no guarantee they would get it back. Juba found his council impossible to work with and none of the other municipalities wanted to help either. Winnipeg council was the last to agree to the Games. He went to see premier Duff Roblin who told him to come back and see him only after Ottawa had shown its support. So Juba went to see Prime Minister John Diefenbaker for a letter of support.

Juba tells the story that Dief was dozing, and when he woke up he had to rush into the House, and asked Juba to go see the minister for the required letter. Juba went to see the minister who said that Dief had asked him to write a letter and he would have it by 5:00pm. Juba said his plane was leaving at 5:00 and he needed it right away. So the federal minister signed a bank letter and Juba dictated to the staff that the letter would offer federal financial support.

A COMMITTEE OF MILLIONAIRES

It was a small financial commitment but Juba could now go see Roblin who fell into place. Juba then set up a committee headed by a couple of Winnipeg millionaires: John Sifton and Culver Riley to do local fundraising. The committee would soon have 25 members. The federal government then changed to the Pearson Liberals and Juba found he could manoeuvre them into increasing levels of support by threatening to abandon the games and let Ottawa take them over.

Minister Judy La Marsh called his bluff one day and forced him to sign a contract on the Games to the effect that any overruns would have to be shared by the province and the city of Winnipeg council. The feds would give up to $1.5 including any possible deficit.

But Juba continued to face a lot of local opposition to the Pan Am Games. It was not till 1963 that the Games were granted to Winnipeg and Juba had spent 6 years largely on his own to get them. Gloria Queen Hughes, his opponent in the 1966 election called the Games “a bunch of nonsense.” Juba won with 45,000 votes to her 5,000. Together with the 67 Games’ other pillar of strength, Jim Daly, Juba spent years tirelessly promoting the games especially throughout rural Manitoba.

The 1967 Pan Am Games were a great success. It was a time of great pride and euphoria. Half a million people visited Winnipeg. Nine thousand people worked as volunteers. Almost all the work was done by volunteers. Audiences surpassed all previous audiences. More people watched one tennis game than had watched an entire week of Davis Cup action. The baseball games alone attracted 98,000 people.

There was an overrun of $589,517 and Juba planned to get the federal government to pay it off. The Liberals refused and Juba went to Ottawa to hear it straight from the Prime Minister who was by then Pierre Trudeau. Juba describes going to see Trudeau at Sussex Drive during winter time. He did not expect to stay long so he did not take his coat off.

Trudeau asked him to advance his arguments why the Federal govt should pay off the deficit. Juba admitted that there were not any. Trudeau then asked what all the fuss is about, we have a contract. Then on his own, Trudeau said he would pay half the deficit. Juba thought he could get more. He changed the subject and left it in abeyance. Eventually the feds paid off the entire deficit. Juba only had to hint to Montreal and its Expo 67 overruns. In 1970 Winnipeg federal minister James Richardson brought the cheque to Winnipeg.

In the final analysis the Games had cost Winnipeg nothing. Winnipeg got all the residuals in the form of the stadium at the University, Winnipeg stadium, the $2,000,000 Pan Am Pool and the Velodrome. Between July 23 and August 7, the US won 204 medals, Canada 77, Mexico 35, Cuba 34, Argentina 23 and Brazil 22. Winnipeg developed a reputation as a major sports city. And it is thought this helped in getting the Jets hockey team.