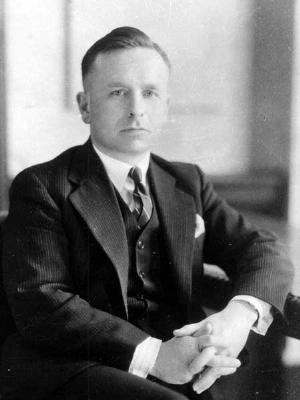 Stuart Garson was born Dec 1, 1898 in St Catherine’s Ontario. Son of William Garson an Ontario MLA. The Garsons moved to Manitoba where his father began a limestone quarry, hence the name Garson. The senior Garson was also responsible for the establishment of the city hydro utility, and served as controller for the city of Winnipeg.

In 1916 contractor AG Snyder wrote Arthur Meighen a letter recommending 18 year old Stuart Garson for a job. Snyder noted that he thought Garson “to be healthy both physically and morally. But sad to say in politics he is a Grit partly by force of heredity and from reading the Manitoba Free Press” too much. Young Garson studied law and in 1919 was called to the bar and practise law at Ashern and Ericksdale.

Stuart Garson began his political career in 1926 becoming the MLA for Fairford. He would serve till 1948. It was not clear what party Garson represented but he became Premier John Bracken most trusted and helpful minister. In 1936 he became Manitoba’s treasurer. Garson grew up with the pressure of debt and made reducing it a major priority. In 1942 he succeeded Bracken as Manitoba’s premier. Garson contributed to new financial relationships between the provinces and Ottawa recognizing the provinces’ increased roles.

In 1948 Garson resigned as Manitoba’s premier and entered Louis St Laurent’s govt becoming minister of Justice and Attorney General. He represented the federal Marquette constituency till 1957 when he resigned returning to his law practise till retiring in 1965. In 1971 he received the Order of Canada along with Gordie Howe and Chief Dan George.

In the 1940s Garson chided the CCF for recommending a lot of social programs but not knowing where they would get the money for them. There is no such thing as a free service. As the govt had to pay for services and the only way to get the money is by reaching into the taxpayers’ pocket. Garson liked the idea of keeping enterprises private so they could be taxed. He observed that in a democracy, it is easier to tax the profits made by others than for the govt to make the profits itself. He noted that every commercial enterprise the province had tried had been a failure. And had cost the taxpayers over $12M. He tried to keep Manitoba taxes competitive with other Prairie Provinces.

He preached diversification in agriculture and for rural electrification, which was started in the late 1940s. He proudly noted in 1940 that his careful govt through skimping and saving, ” which the CCF held in contempt”, had saved $2.25M. Garson urged voters: If you believe in a free society, you can’t look to the govt for maintenance, direction, support, and initiative. Stuart Garson died 23 years ago on May 5, 1977.