Winnipeg’s first chief of police JC Ingram was hired onFebruary 19, 1874. Ingram had come to Manitoba before 1870 and had worked for the provincial police. He was well known as the man that had arrested Ambroise Lepine (Riel’s adjutant general) after the Riel Rebellion. Ingram was 23 years old and was known to be “a good man with his fists.”

He had been one of four applicants. Perhaps the most deciding factor was that Ingram was a good friend of Mayor Francis Cornish. On Feb 24, 1874 a fourth by-law of the city established the Winnipeg Police Dept. Ingram would receive a salary of $750 per year, and a staff of two constables earning $500 per year. By summer the police force had shirts, whistles, batons, and police badges. But curiously, their engraver got the badge insignia all wrong. Instead of a beaver he had drawn a gopher. (For go for people)

But it soon became apparent that moral was not good. Ingram did not get along with his men. In particular they did not like his habit of associating with the ladies of the night. Despite this and conflicts with several aldermen, with Cornish’s support he kept his job. Ingram’s association with prostitutes continued as Winnipeg’s stock of saloons, hotels and red light districts grew. Winnipeg and Barrie Ontario were known as the two wickedest places in Canada.

On June 7, Ingram’s constables conducted a raid on a Sherbrook St brothel. They were barred entry to a second floor room. When they pushed past and gained entry, they found an unclothed Chief Ingram in the company of harlot Ella Lewis. Cornish had lost the 1875 mayoralty and in his place now was William Kennedy. The next day Ingram appeared before Mayor and Magistrate William Kennedy and was fined $8 and suspended. On the 14th Ingram tendered his resignation.

WHAT HAPPENED TO INGRAM

Ingram travelled the west and eventually moved to Calgary where he opened up a hotel and bar. When Calgary set up a police Force in 1885, Ingram became Calgary’s first Chief of Police. But he continued to battle with local authorities and in 1888, left for Rossland BC where once again, he became their first chief of police. After a short stint there, he left to work in a mine were he was blown up in a dynamite explosion in 1905.

On July 1, 1875, David Murray became Winnipeg’s next chief. Murray was a schoolteacher from Nova Scotia. He was a popular handsome man, known for his fine singing voice, which was in high demand at local concerts. Murray now had 5 constables. They worked 11-hour shifts 7 days a week. By November Murray had purchased the famous buffalo coats for $17 a piece, and more equipment including four “wrist snappers,” 3 pistols as well as uniforms for the men.

Murray would report 749 cases in 1880: 303 were for drunk and disorderly conduct, 212 were for inhabiting, frequenting, or maintaining a house of ill fame, 13 were charged with theft, 14 with assault, and 1 for gambling. In the 212 cases, 177 women listed their occupation as prostitute. While Murray was not accused of associating with prostitutes, future police chief McRae would face the same difficulties as Ingram. Vice was a problem and in 1910 Ingram faced a Royal Commission investigating police toleration of prostitution. 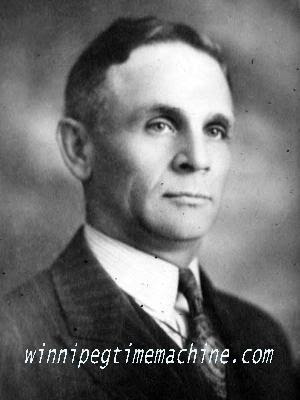 The Man Who Didn’t Want to Be Premier

Honest John Bracken, the man who did not want to be Premier, ran the province for 22 difficult years between 1922 and 1944. Bracken was born the son of a dairy farmer June 22, 1883 in Leeds Ont. He loved sports especially football and hockey. He was one who kept his feelings to himself. He went away to high school but failed his final exams returning home defeated. He took on the management of his father’s dairy farm and made into a success. Up at 4:30 in the morning and in bed by 9, Bracken tended the farm 7 days a week. Like farmers everywhere, Bracken had been raised on values of hard work, and self-reliance.

Later he applied to the Ontario Agricultural College where he became one of 300 students. There he applied himself and did well. He would later find a clerical error had occurred. He had in fact passed. He graduated with top marks and took on his first job. He went west in 1905 to head up the Manitoba a section of the Federal Seed Bureau providing better seeds to western farmers. He was then wooed further west to work in Saskatoon by WR Motherwell. He became a specialist in dryland farming writing several seminal texts. In 1920 he returned to head up Manitoba’s Agricultural College. He loved farmers and talking about farming. And he loved to work, taking time out only for his beloved curling.

After winning the 1922 election the United Farmers of Manitoba found themselves without a platform and without a leader. After approaching several agricultural leaders they decided on Bracken. Bracken who had no interest in politics and who felt as head of the Ag College he already had the best job in Manitoba, turned them down flat. He gave such a stirring speech why he wasn’t the man that the United Farmers of Manitoba realized they wanted this co-operative non-partisan even more.

The next day they presented him a petition asking him once again to become leader. And once again he refused. On the third try they made sure that they saw him at home with his wife present. Once again he said no. But then Mrs Bracken said: “John you should help these men out.” He agreed.

But first, Bracken who had never voted in his life before had to win a seat. He decided to run in The Pas. Bracken won his seat and won elections for 22 years including some with acclamation. Forty years later, Bracken would tell a reporter a familiar story. After the election, the part aboriginal mayor of The Pas had told Bracken that he had been offered $10,000 by the Conservatives to run against Bracken but the mayor decided not to run.

Bracken was at the helm for the most difficult times Manitoba faced. He introduced income tax and raised the gas tax. He reduced govt spending, fired civil servants, and cut back mother’s allowances. Within three years he was running a surplus. He was seen as arrogant, unable to forget his schoolmaster background and treated MLA’s as schoolboys.

After his long service in provincial politics, in 1942 Bracken was once again persuaded to serve another group’s needs, this time as the leader of the federal Conservative Party. He convinced them to add the name progressive, but he was disappointed in the partisan bickering and his performance was judged lacklustre. He lasted two years. Some saw him once again, as the wrong man in the wrong party.

Bracken gave Manitoba 22 years of unselfish govt. His influence lasted as Brackenism would become the philosophy of the Garson and Campbell govt that would follow for another 15 years. In 1954, Bracken the teetotaller headed a Royal Commission on Liquor. His report recommended the liberalisation of drinking laws. Years later he regretted the increasing rates of alcoholism. He retired to Manotick Ontario to breed horses and died Mar 16, 1969. 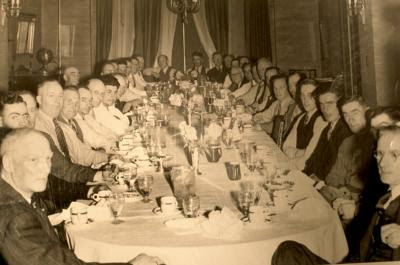 Walter weir was born in High Bluff Manitoba Jan 7 1929. He was schooled there and in Portage La Prairie. At age 24 he purchased a funeral business in Minnedosa. He had met wife “Tommy” a nurse from Saskatchewan, on a wiener roast blind date. They had four children. Weir became involved in the life of the community and served on the town council, the Hospital Board and the local Kinsmen Club.

In 1959 Weir became the local MLA in Duff Roblin’s Progressive Conservative govt. At age 32, in 1961 he became the youngest ever cabinet minister. Now responsible for Highways and helped connect many rural communities to hard paved roads.

Weir loved people was known for his warm friendly personality. Even his political opponents liked him. He never sought the limelight. He was a man of integrity. Weir had built trust with many of the province’s municipalities. Weir was a fiscal conservative who wanted to control govt spending and to hold down taxes. Weir would serve for only 27 months.

In 1969 New Democrats under Ed Schreyer won the first socialist victory in Manitoba. Neither a sore loser nor a hateful person, Weir served as opposition leader for a year and then left Manitoba for Missisuaga where he ran a national funeral firm. Some said that this man who had won four elections, lacked the toughness required to be premier or opposition leader.

In 1979 Weir was asked to chair a review of the way property is assessed and taxed in Manitoba. It work would be one of his most significant achievements. Weir’s committee addressed the problem head on. It proved to be a revolutionary report in that it recommended that assessments be much more closely related to actual property values and not the archaic convoluted method that used outdated values. For a decade the City of Winnipeg ignored the recommendations and had to be literally dragged into this more modern and equitable system. The recommendations also wreaked havoc with farmers whose buildings had been hither-to underpaying taxes. There was a move to demolish any old building for fear of having it taxed.

One evening while Walter Weir was helping his wife Tommy with preserves in the kitchen, he suffered a heart attack and died on the way to hospital. Walter Weir died on April 17, 1985. He was only 56. A life cut short just as Weir was making an increasingly valuable contribution to Manitoba life.