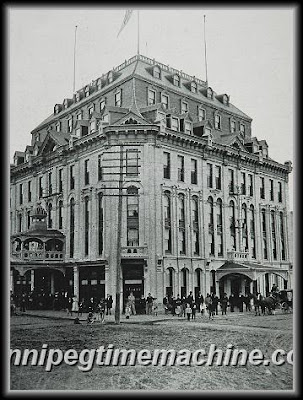 The Leland Hotel was built in 1883 and was once the city’s most prestigious hotel. It is one of Barber and Barber’s last remaining buildings in Winnipeg. It was built by Scottish businessman Archibald Wright for commercial travellers in Winnipeg to do business. It fronted what was Old City Hall and the Old Market Building. It was so successful that four storeys were added in 1892. But in 1913 a fire gutted the top three floors.

Archibal Wright who built the Leland was born in Glascow in 1852 and came to Winnipeg in 1869 and later set up the Winnipeg Saddlery Co. In the days of early Winnipeg He served as alderman and was also a member of the first board of Winnipeg school trustees. Wright also sold the city the land for Assiniboine Park in 1912.

The Leland is an old building dating to the Victorian era and it has some remaining architecture in some stone details. All the alterations since the 1950s have removed most its original architecture. But for the last 25 or more years, the Leland has become run down and a real problem in the Exchange District.

The blight the hotel has caused to the city hall area and how ending the hotel’s sleazy effects is necessary in the future of the restoration of the Royal Tower.